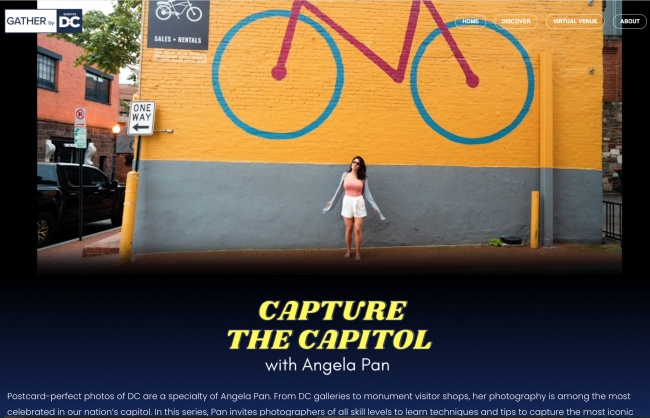 Over the summer, I worked with Events DC to create a 6-part video series of all my favorite places in DC and how to photograph them. The series is called “Capture the Capital” and there will be two episodes released every Tuesday. I’m so excited for you to watch them!

The first two videos are about the Lincoln Memorial and the US Capitol. If you follow my work or visit my blog, you know that these two places feel like home to me. I go to these places so often that I feel like I can walk them with my eyes closed (I’m giggling to myself thinking about what that could look like. LOL). They are some of my favorite places to capture the sunrise and sunset, and I give all my favorite tips and angles on how to capture them.

Special shoutout to my friend, Dave who helped me film these two videos, and Francis who helped me edit them. The videos would not have been nearly as good as they are if it weren’t for their help.

Instead of just showing you the videos, I thought it would be fun to give you a little behind the scenes of what it was like to film each of these videos as they come out. So check this post each week for a little more insight behind the vids. 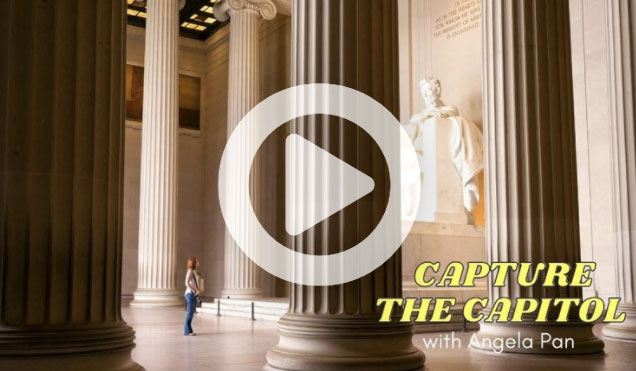 Dave and I filmed this video at sunset. I remember the weather being really nice but if you have ever been to the National Mall at that time of day, then you’ll know that it can get crowded. So in this video, I offer my best tips on how to capture the crowds including time-lapses and long exposure but I also encourage you to use people in your images to tell more of your story of what it was like being at the memorial while you were there.

But in the middle of filming, we went inside the Lincoln Memorial gift store to check out my prints and postcards that are available for sale. As Dave was filming them, the man working at the store told us that we can’t copy them and try to sell them on eBay. Both of us laughed and Dave told the nice man that I was the actual photographer of the images. It led to a fun conversation that may have lasted a bit longer than I expected because we were losing the sunlight fast! As soon as we left the store, we went straight to the reflecting pool to film the rest of the video and in the end, it all worked out!

The US Capitol Building 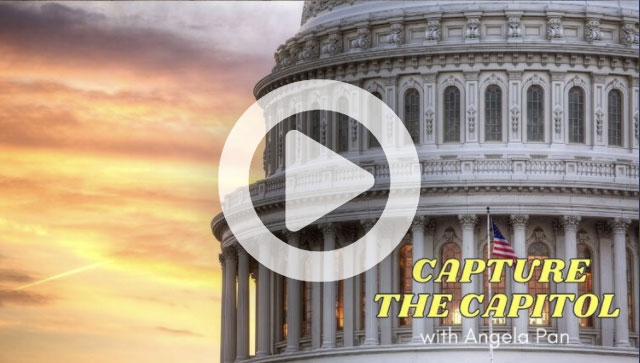 This was the very first video we filmed in the series. It’s a bit longer than the rest of the videos since I cover sunrise and sunset it in but let me tell you, I was EXHAUSTED! I had never done anything like this before and I have to admit that I had to take a little cat nap in between the sunrise and sunset video shoots. But it was so fun and worth it.

Dave and I tried different angles and ways to capture what it was like photographing the US Capitol. One of our ideas was to use a GoPro and strap it to my chest so that you get that first-person view of what I’m seeing on my camera screen. It’s probably one of my favorite parts of the entire video.

I also loved photographing the sunset that day. It wasn’t a particularly colorful sunset but the light was great. There are only a few things better in life than walking down South Capitol street at sunset in the summer with a camera in your hand. Ugh, I just love it so much.

These next two videos are about the Kennedy Center and Georgetown. I chose these two locations because they are some of my favorite places in the city to spend a weekend and you can capture some great images. I hope you enjoy these photo tips and behind the scenes stories about them. 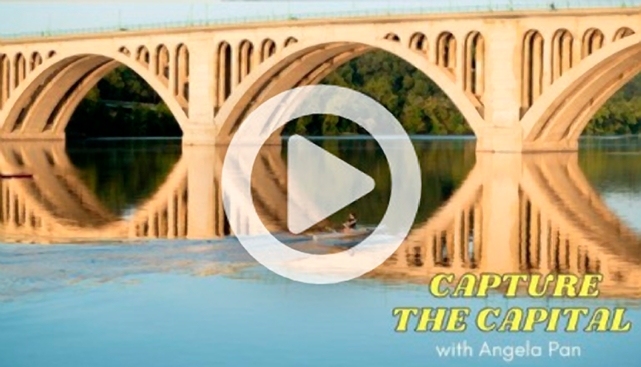 Who doesn’t love Georgetown? To be honest, I was there this past weekend grabbing a cupcake from Baked and Wired (*chef’s kisses).

In this video, I take you along the waterfront and highlight some of the great public art and architecture you can see in this part of the city. We filmed this on a Sunday morning and I’m normally not a coffee drinker, but I bought a cup right before this shoot. I wanted to be extra attentive while filming this but somehow I ended up ad-libbing a majority of this video. Don’t get me wrong, I had a whole bunch of notes and points that I wanted to make for each of these videos but there was something about the beautiful light we were getting on that early morning shoot, that made me extra excited to be there. Maybe it was the coffee, or maybe I’m just a morning person but I love the way that this video turned out. 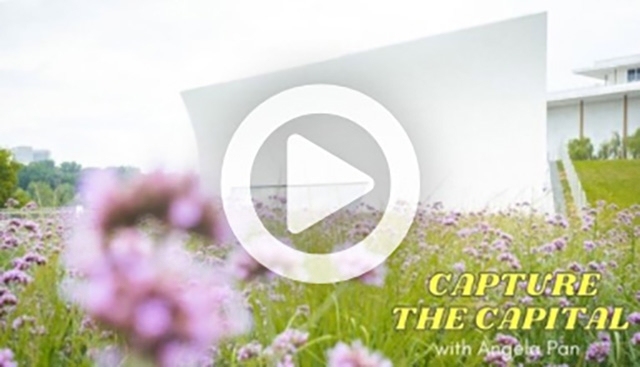 Right after we finished filming the Georgetown video, Dave and I headed straight to the Kennedy Center to film this one. I changed my clothes really quickly in the car and it was probably the most efficient video we filmed. It may have been because there isn’t as much space to wonder as some of the other landmarks that are highlighted in this series or I just love the images you can capture from the Kennedy Center and the Reach, but there’s something about these white buildings with the green and gold accents that looks so elegant and clean in pictures.

We also filmed some b-roll shots with the GoPro again! Instead of it being strapped on my chest like it was for the US Capitol Building video, Dave had the creative idea to strap it on to the end of a selfie stick and used it to hover over me as if it were a drone. This perspective made for some really cool shots!

The final week of videos is here! 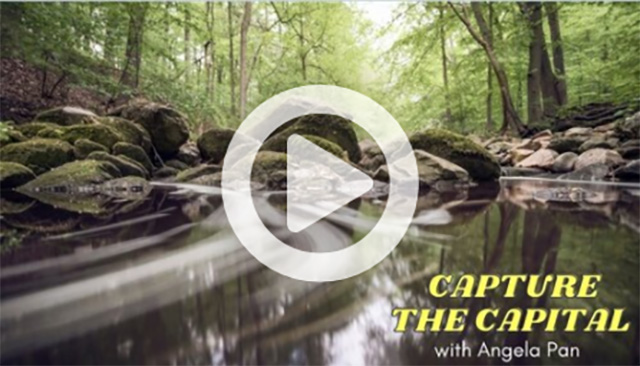 This video in Rock Creek Park was a little more challenging to film than I had anticipated. It was the last one to be completed but it wasn’t on my original list of places that I wanted to shoot. My original idea was for Chinatown images at night. Dave and I met in Chinatown and the Friendship gate was all under scaffolding, the streets were under construction and it was just loud and bustling with people. I didn’t take into consideration that we tried filming this on a Friday night. So after watching the footage that we did get, I was not happy with it.

The following week, Dave and I tried to film at Union Station where we got kicked out and by that time, Dave had some prior engagements and wasn’t going to be able to help me film any other videos. Luckily, my friend Andy was available and helped me film this one of Rock Creek Park. Minus the minor set back that Beach Dr was closed and we had to hike to Boulder Bridge when neither of us were expecting to do that, the video shoot went very well. Because all these set backs, I think this video of Rock Creek Park is one of my favorites of the entire series. It just took so much effort to complete and I’m so glad everything worked out for the best! 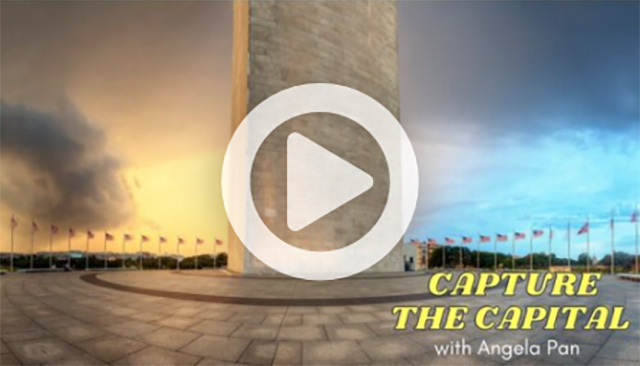 And the very last video of the series is of the Washington Monument. The monument itself is just so iconic to the city that I couldn’t help but add this to the list of locations we filmed. This one in particular I remember just sitting on the grass for a while and casually talking to Dave as he filmed me speak about stories of photographing the Monument. It was a lot more relaxed than any other shoots we had which probably makes this my other favorite video of the series. It’s so funny that these two were released together!

Speaking of coincidences, Andy makes an appearance in this video!

I hope you have enjoyed the “Capture the Capitol” video series and you feel inspired to capture some of your own around the city. Please feel free to message me if you have questions about any of these locations or about photography in general. Special thanks to Events DC for working with me on this project. It was so much fun.