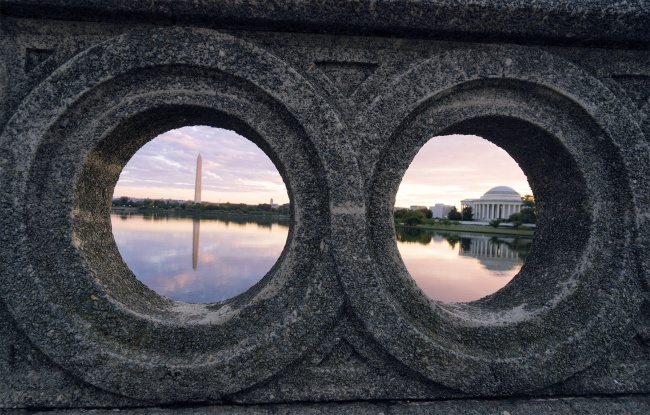 A quick break from autumn Maine images to show off Washington DC’s beautiful sunrise from yesterday. Sunrise is around 7:15ish now, so I have to take advantage of the later wake up call while I can. I shot this at the Tidal Basin on the little footbridge between the Jefferson Memorial and the Franklin Delano Roosevelt memorial. It’s an angle that I’ve always wanted, but wasn’t sure I could get. I’m so glad it actually worked out this time.

Since I’ve been shooting DC sunrises for years now, I’m finding it to be a challenge to photograph it in new, different ways. I was super happy with the way this one turned out. My favorite part about the image is the color change between the two peep holes. The transition from cool to warm tones in a photograph is always something I strive for. I feel like it completes the whole color story and really adds a lot of dimension in a photograph. Plus the reflections of the Washington Monument and Jefferson Memorial look super cool too.

In order to capture this, my camera settings were F/6.3 at 1/20th of a second and ISO 200 with my Sony A7II and 16-35mm wide angle lens. This was shot handheld although I did try to shoot it with my tripod. I just couldn’t get the tripod at the level that I wanted and I was constantly moving around to make sure the the monuments were centered, so the tripod just didn’t work out. Now that I think of it, I must have looked like I was spying on someone while I was sitting on the sidewalk and moving my neck all around to make sure everything lined up correctly. LOL, oh well. It’s not the first time I looked crazy for an image.