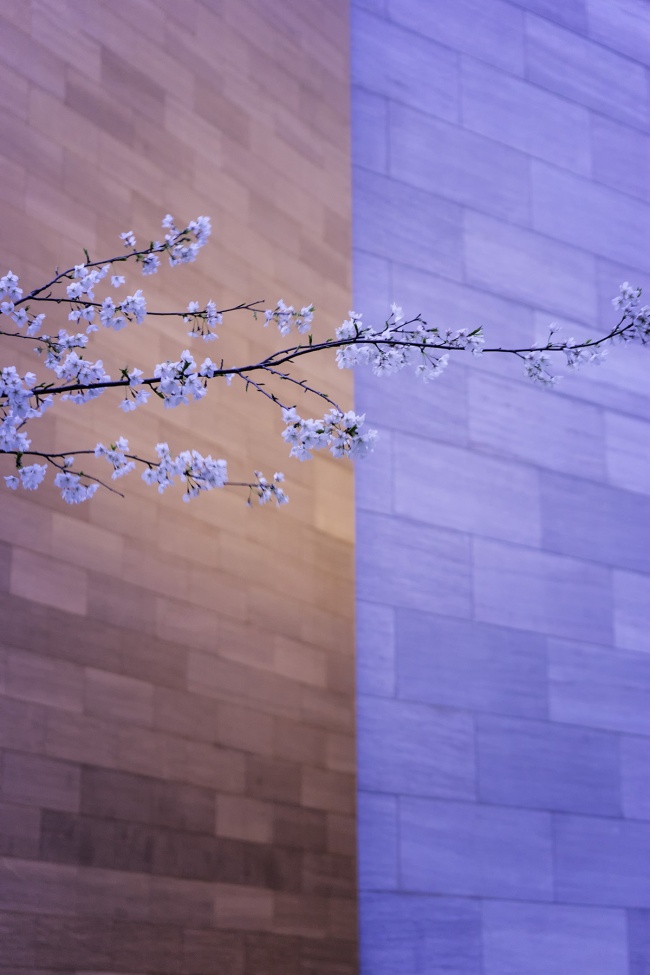 What’s crazy is that I’m still not even close to done with all my cherry blossom images from this year! We had great bloom and I tried to go out as often as I could. You would say that I went pretty hard! Out of the two weeks, I think I only missed two sunrises. Even if it was really grey and windy, I still went out to see what I could find.

This was captured at the National Gallery of Art. The same time I took this image. But at this point the sun had already come up so there was a little more light available. If you’re not familiar with the gallery, then it may be a little difficult to see what’s really going on. The blue part is just the side of the building. The orange/warm part is the inside of a corner of the building. It goes in a little bit and it has it’s own special uplighting which is causing the warmer tones. I love how the cherry blossom branch just unifies everything in this image.  I have a couple more variations of this image that I still need to play around with but if you’ve been following my blog then you’ll know I love the contrast between warm and cool tones that this image is bringing. It would be really neat to see this as a series. So many ideas, so little time! One day.

And the cherry blossom vlog is coming! It’s been taking me a while because I finally downloaded Final Cut Pro X. I figured it was time to upgrade my video workflow as well. Thanks to my friend, Andy for the extra push! I love how creative you can get with the videos but it’s just taking me a while because I literally have to google every single thing that I want to do. It will be worth it though. Just taking time… apologies.