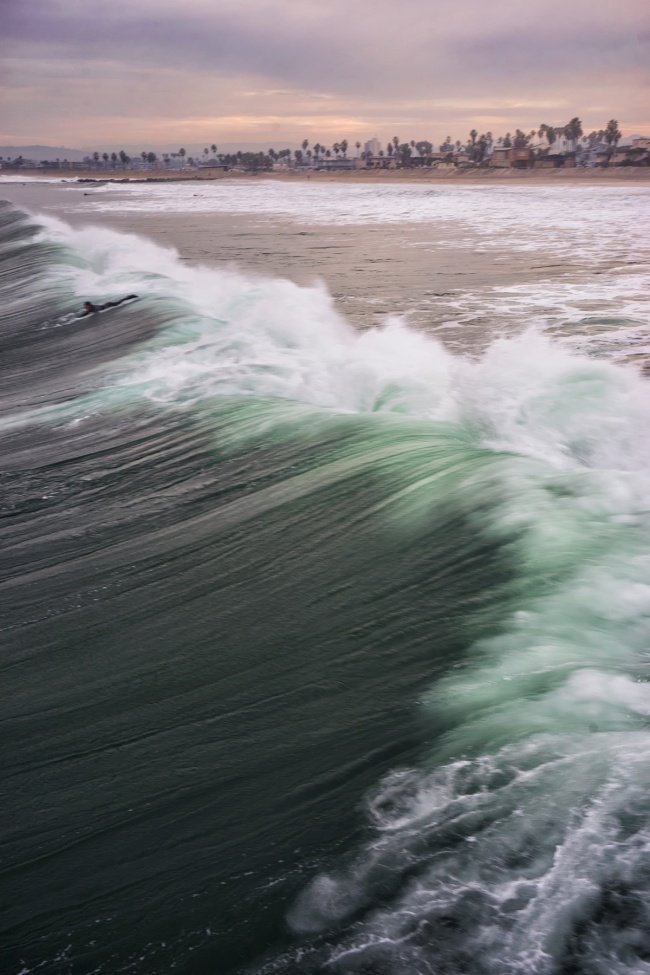 Out of the 7 days that we’ve been in San Diego, 6 of them have been foggy. It’s not foggy all day and it mostly comes around sunrise or sunset, the best times for taking pictures. I love the fog and everything but I thought I was coming to California for some sunshine.

But I am not letting any of the weather stop me from shooting. If I can’t photograph the skies, then I will try my best to photograph other things. This particular morning was not foggy but it was extremely cloudy. I found myself on the Ocean Beach pier just watching the waves go by. As the sun was rising higher in the sky, I noticed how beautiful it made the water look. I positioned myself on the pier so that I’d be shooting towards the shore and watching the back side of the wave roll by me.

My favorite part of this entire image is that little bit of light of aqua color on top of the wave. That was the color and light I was looking for while I was shooting this image. I don’t know but there’s something so fascinating about watching the waves roll by from up above. I love watching the patterns and repetition. Next time I need to bring the drone!

The surfer in the image was just an added bonus. I didn’t even realize he was there until I looked at these images on the computer. It’s pretty cool to see him in context to the wave. He looks so tiny compared to it.

My camera settings for this image is F9 at 1/50th of a second and ISO 400 with my Sony A7II and 28-70mm lens. I didn’t not shoot this with a tripod but was using the pier ledge to stabilize my camera.