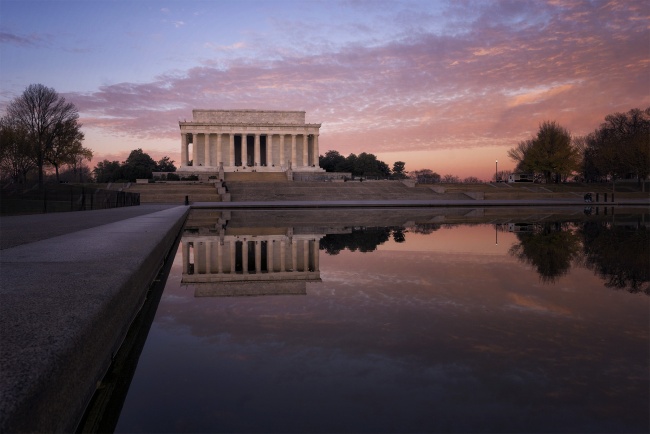 This was taken the same morning as this image just about 30 minutes earlier. It’s a weird perspective in two different ways. 1 because this image is facing west. For some reason, this sunrise had all the color in the opposite direction and hardly anything facing east. You could imagine my surprise when I actually saw it. It was totally unexpected but very much welcomed. 2 because I knew I wanted to try to get the reflection of the colors in from the reflecting pool but there would have been no way I would have been able to get to the other side of the reflecting pool without the colors fading. So I decided that the edge of the reflecting pool was good enough. Personally, I don’t like it when I see other photographers stick their tripods in the reflecting pool to take pictures. I don’t know why but I just find it disrespectful. So this was a handheld shot to make it look like my tripod was in the water. LOL. Don’t worry, no tripods went swimming to capture this image! It stayed safely in the middle of the sidewalk so that no one could push it in. And by no one, I mean me.

But overall I love the way it turned out, especially the side of the steps where it sort of looks like a semi-circle in the reflection. Such an interesting pattern but one I’ve never noticed before and don’t know if I really would have if it weren’t for this angle.

Lesson learned here. Always look behind you when taking pictures. You could be missing out on some fantastic color and would have never known it!