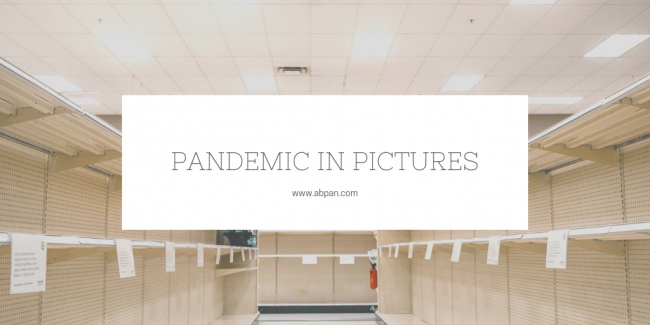 Virginia was issued the initial stay at home order on March 30th, 2020 due to the Coronavirus. It didn’t come as a surprise but it was still something that I had to mentally prepare for. Honestly, one of my first thoughts about it all was, “How am I going to go and take pictures?” Not only is photography fun for me, but it is my way of exploring places, finding stories, and expressing myself. In the past, the longest I had ever gone without taking pictures was a week. I already knew the stay at home order was going to be tough.

The world was a rapidly changing place and I was craving to capture it. Here’s are the images I created in the first two months:

Covid-19 really started being a concern in the Washington DC area just before the cherry blossom season. We had an unusually mild, dry winter that allowed the cherry blossoms to bloom a bit earlier in the year than they usually do. So I was excited to be able to visit the Tidal Basin with a bit less of a crowd since travel was in the process of slowing down and social distancing was starting to become a new term. I tried to go as much as I could until it started to get too crowded. When it got to be too much, I decided to just stay home and be happy with the images I was able to create. My logic was to take as many pictures as I could until it got to be unsafe and then spend quarantine editing them. 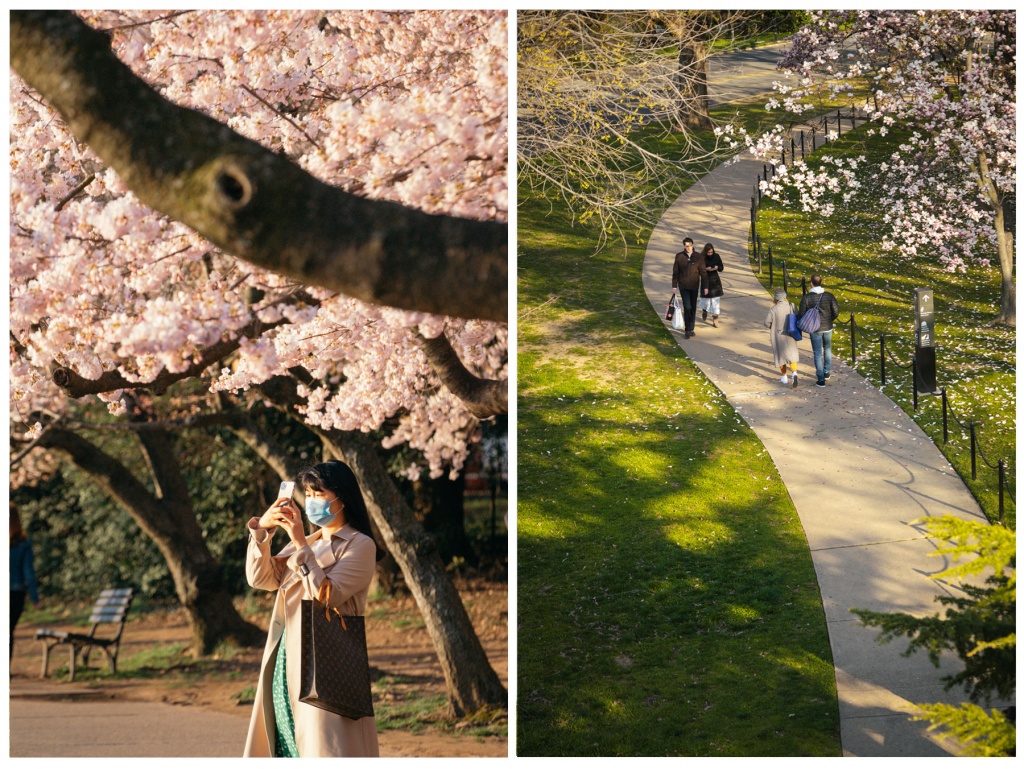 Weekdays at sunrise are really the best times to visit the Tidal Basin during cherry blossom season, Coronavirus or not. 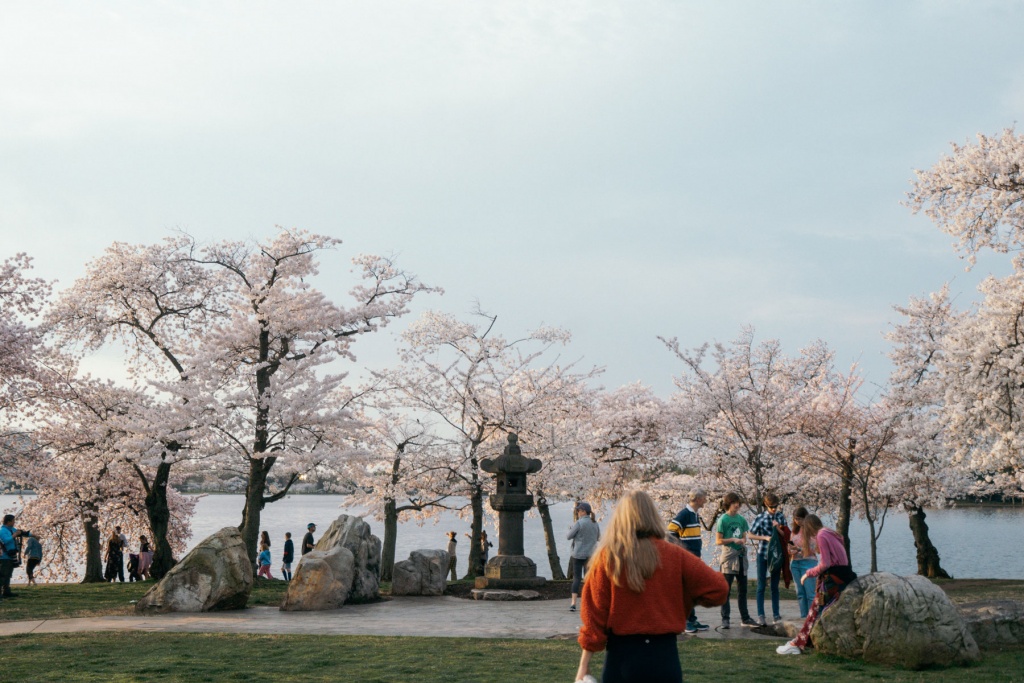 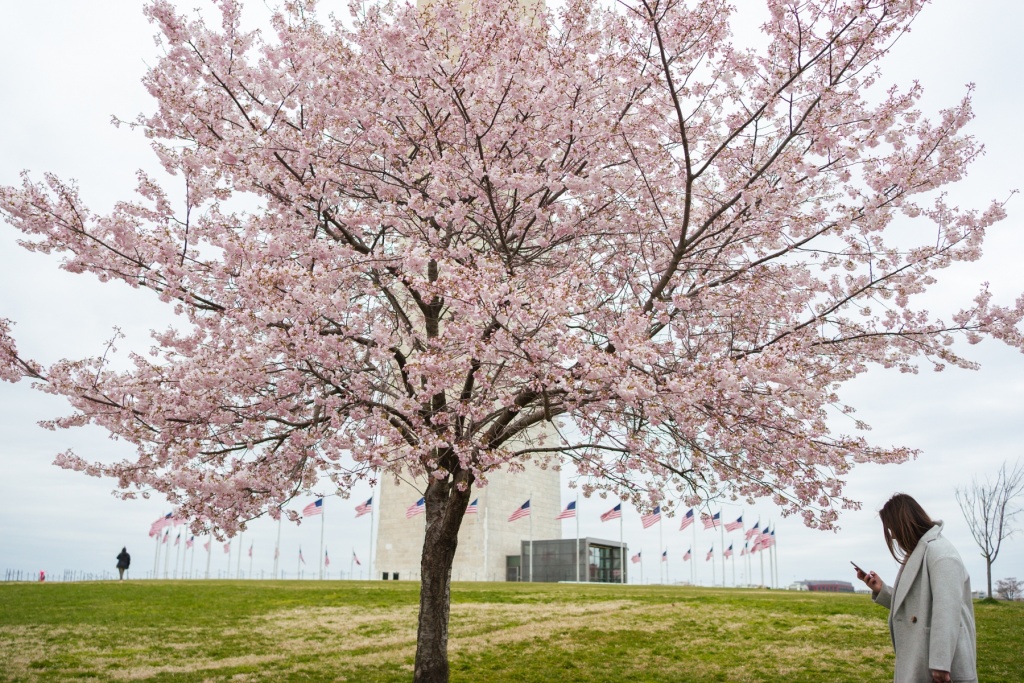 The cherry blossom trees are smaller at the Washington Monument, but still just as beautiful. I tried capturing a few images from there since it’s a larger area to roam. 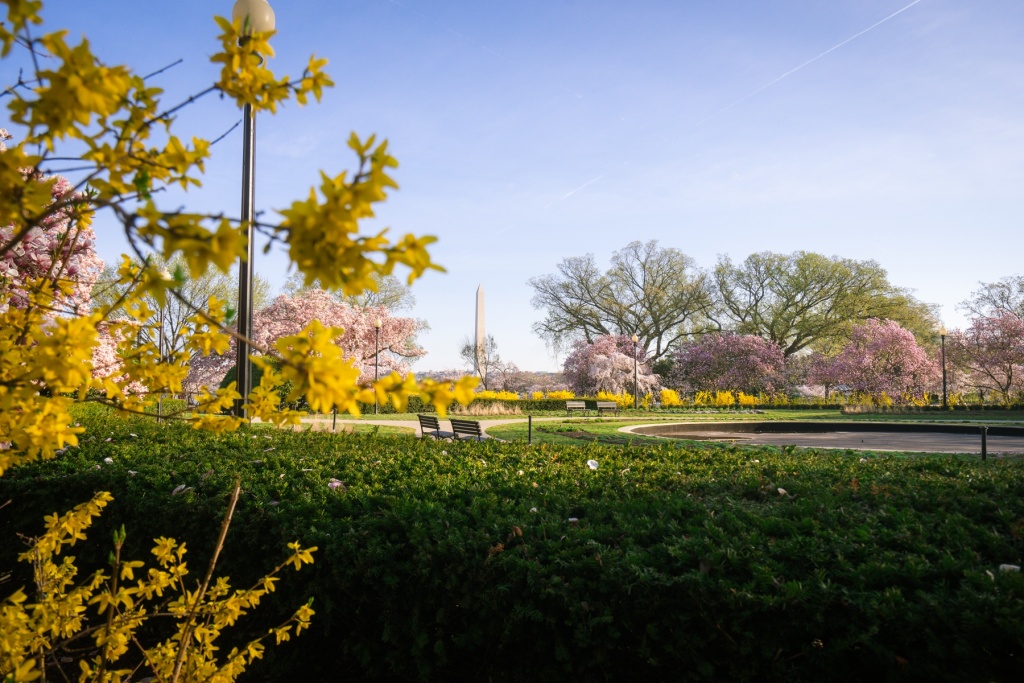 Cherry blossom trees are seen from the George Mason Memorial

That weekend, Andrew and I decided that we should try to get out “one last time” before we had to stay home. We decided that the Mount Vernon trail would be a good place to go and stretch our legs. Andrew walked Frankie on the trail which allowed me to take my camera and capture a few images as well.

Considering the stay at home order was placed the very next day, I’m so glad we did this. It was a foggy morning and the trail was not as crowded as it usually is. We parked our car at Gravelly Point and headed towards the Navy Merchant Marine Memorial. 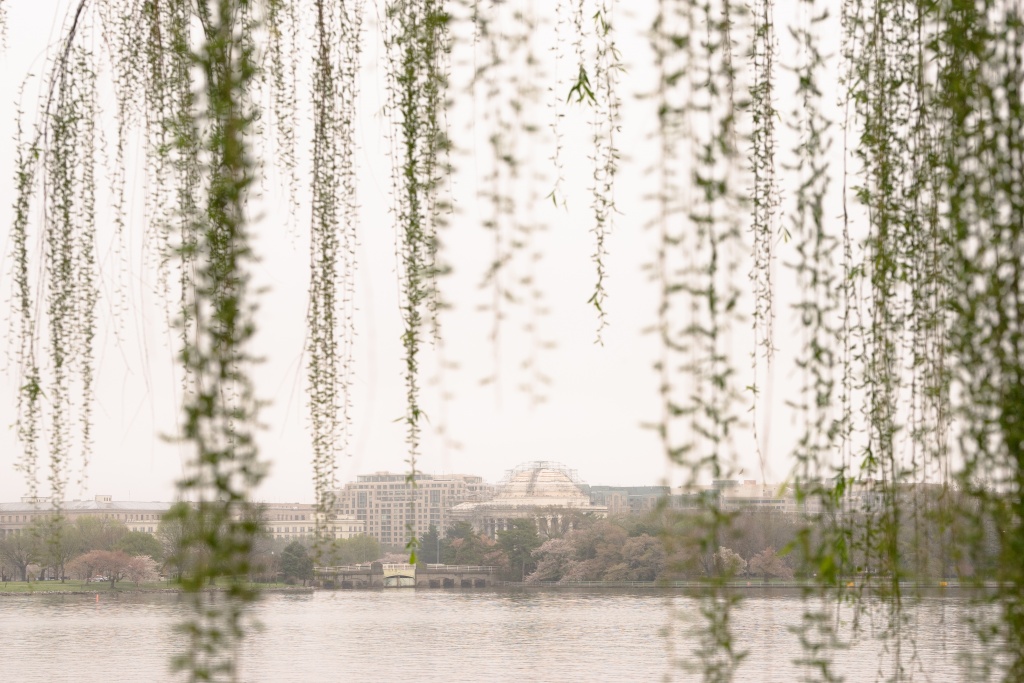 At the cherry blossom peak bloom, but the pink flowers came out a little hazy in the fog. 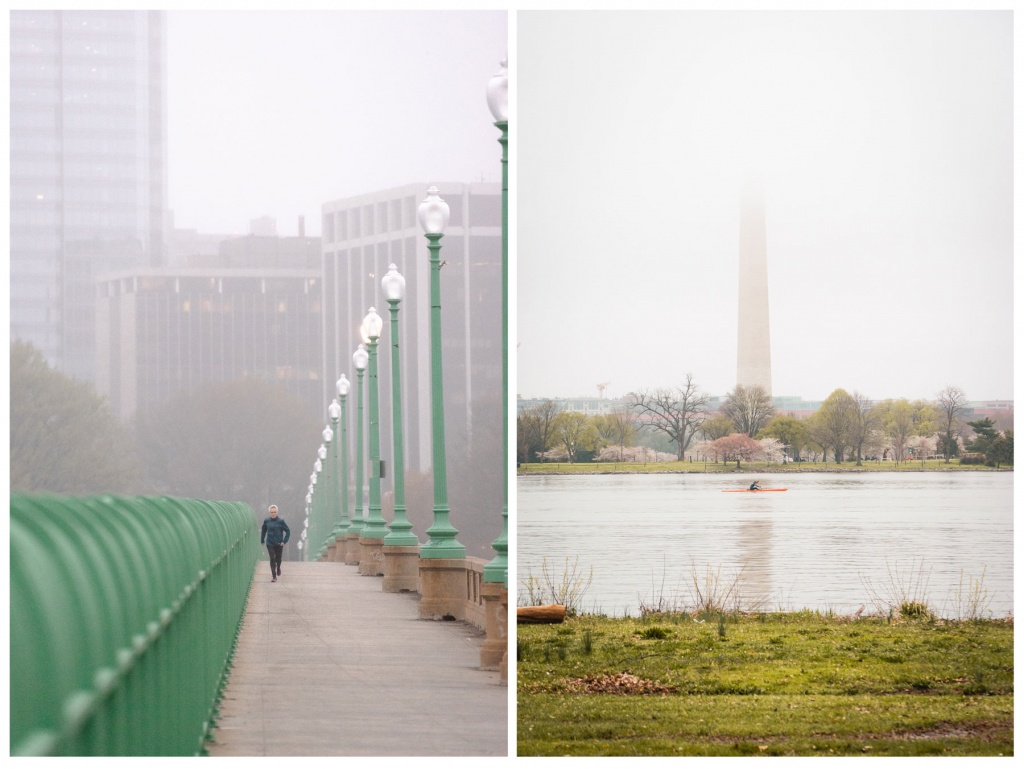 (L) A quick stop in Georgetown along the Key Bridge. (R) Views of the Washington Memorials are seen all along the Mount Vernon Trail.

So this is where my real pandemic images begin. It had been about 1.5-2 weeks since our walk on the Mount Vernon trail and I was going crazy. I had never purposely taken such a long break from taking pictures, and it was not making me feel good. I was really craving creativity, seeing what this new world looked like, and just to walk around with my camera. So I started locally. I mean really local since I live within a few blocks from the metro. I figured with public transportation being at an all-time low, it was probably the safest and most isolated I would ever see it.

Even though this is a route I routinely walk with my dog, I still felt uneasy walking around with my camera. These images were all taken in about a 20-minute span. After that, I went straight home. Just even capturing a little bit of what it was like in the world was enough to keep me content for a bit. 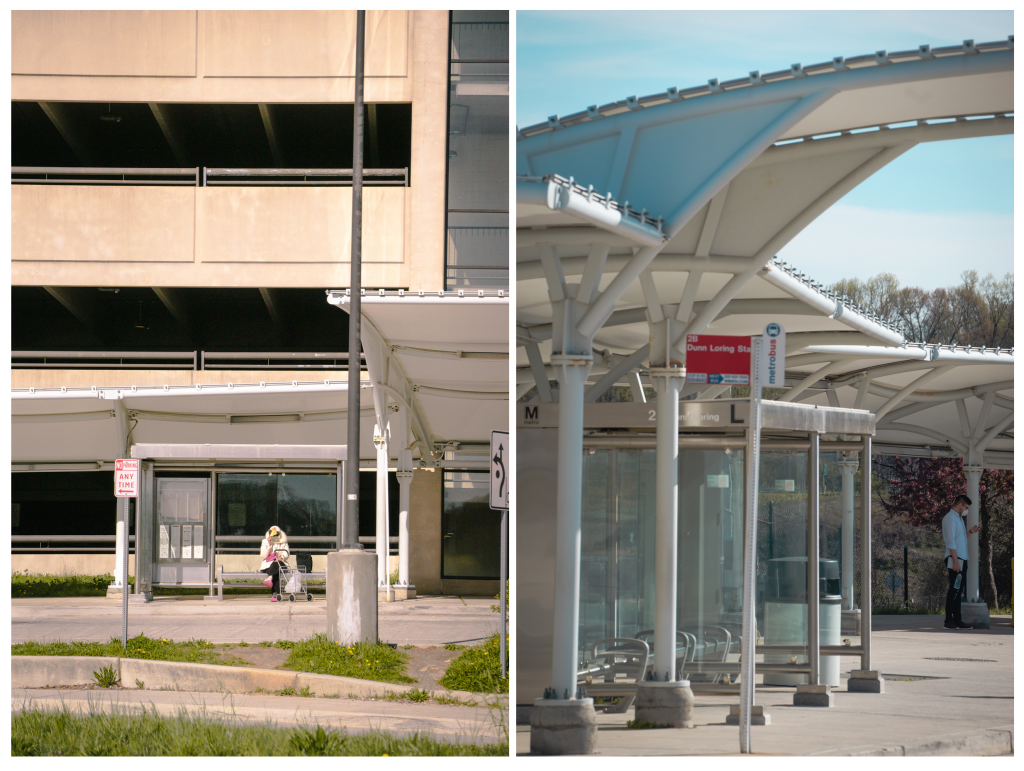 Passengers wait at the bus stop 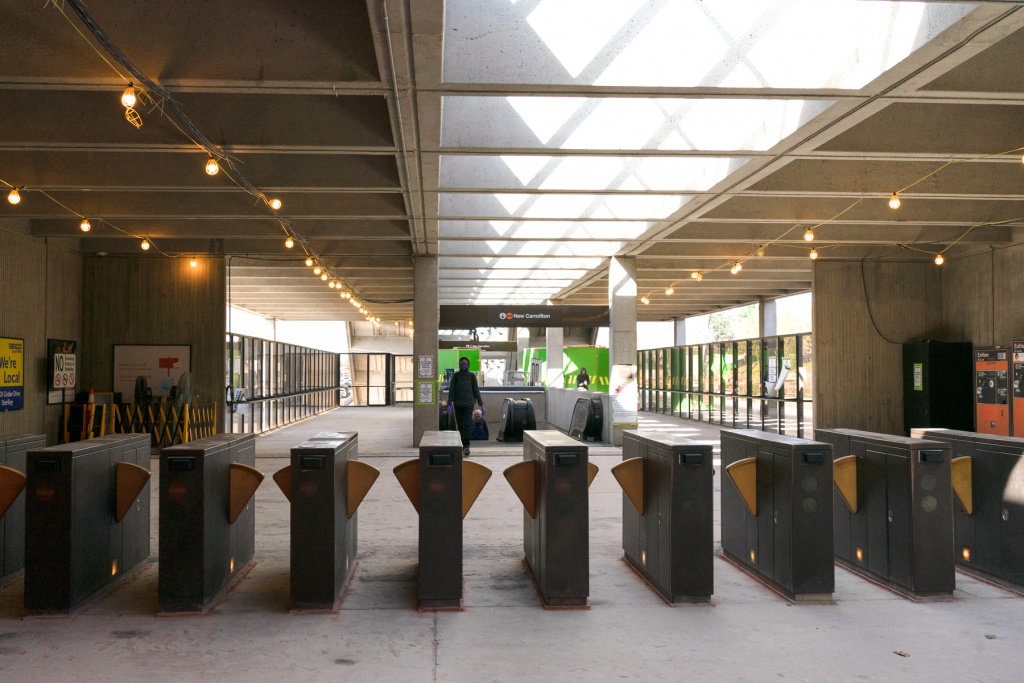 But after a while, I still wanted to capture more of what was going on. The following weekend Andrew agreed to drive me around Washington DC so I could try to capture what it’s like in the city during the pandemic. At that time we did not feel comfortable getting out of the car so we spent about an hour just touring the city from inside. I found interesting framing using the car’s backseat window and felt like it evoked my feelings of being confined and missing the streets I used to walk around almost daily. See more from this series here. 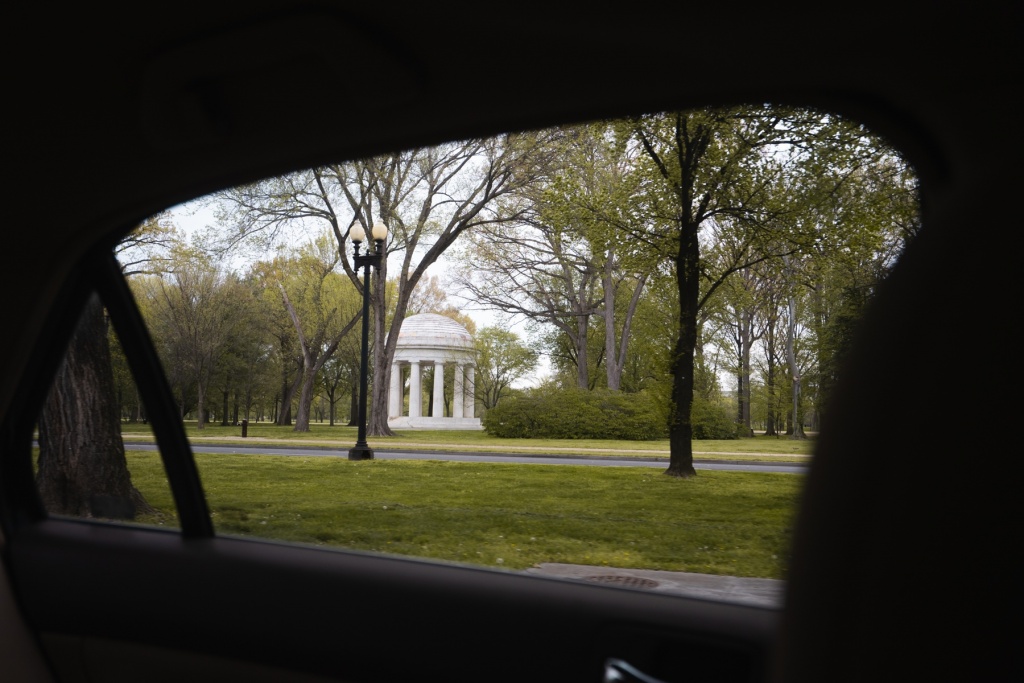 It’s funny that I didn’t really have to look forward to where we were headed to give him turn-by-turn directions.

As time went on, I started venturing out on my own. Not very often, maybe every week or every other week, but I still did not get out of my car. I drove around Northern Virginia and pulled over on the side of the road to capture a few images. One of the good things about the quarantine is that parking is crazy easy when no one else is on the streets. 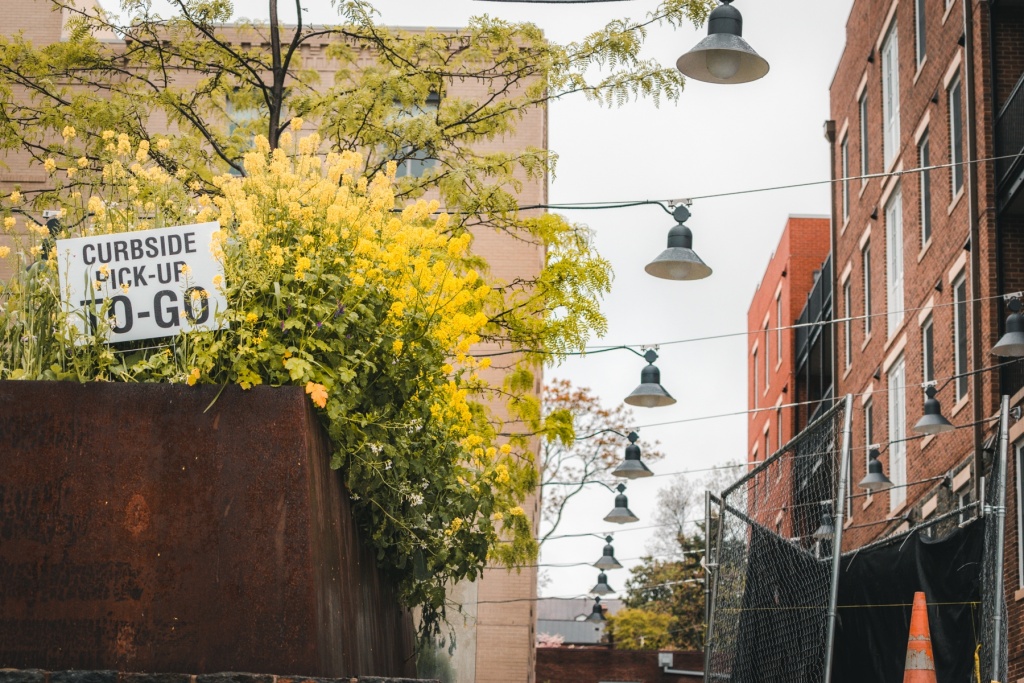 To-Go sign captured from the driver seat of my car in Old Town Alexandria, VA 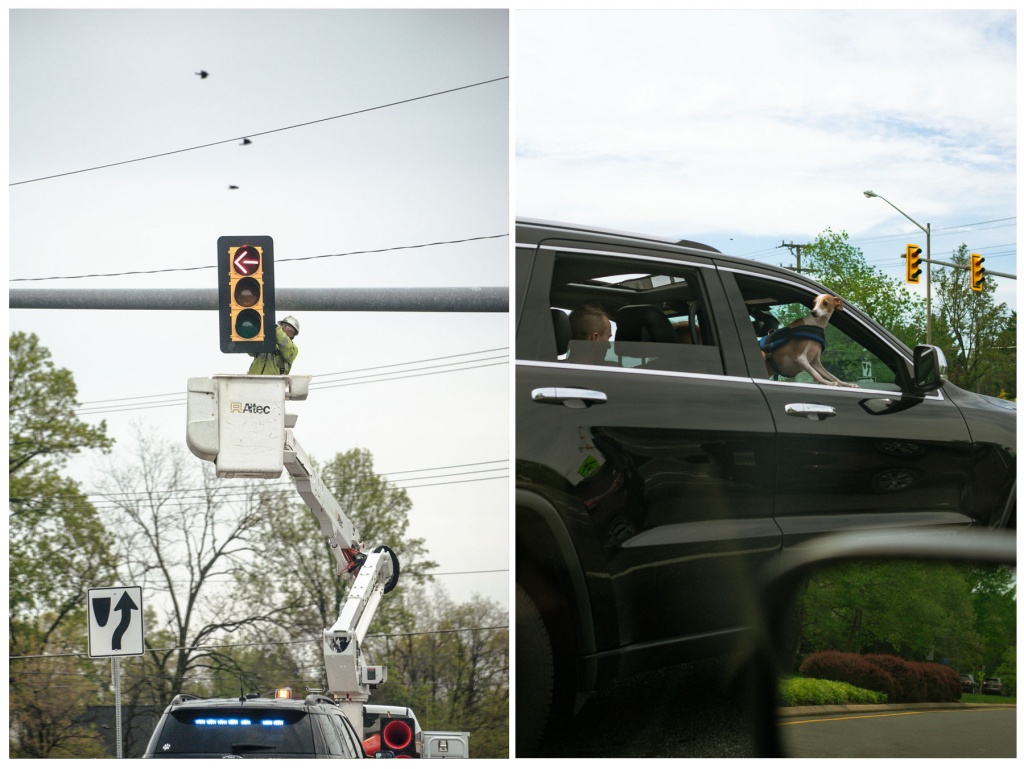 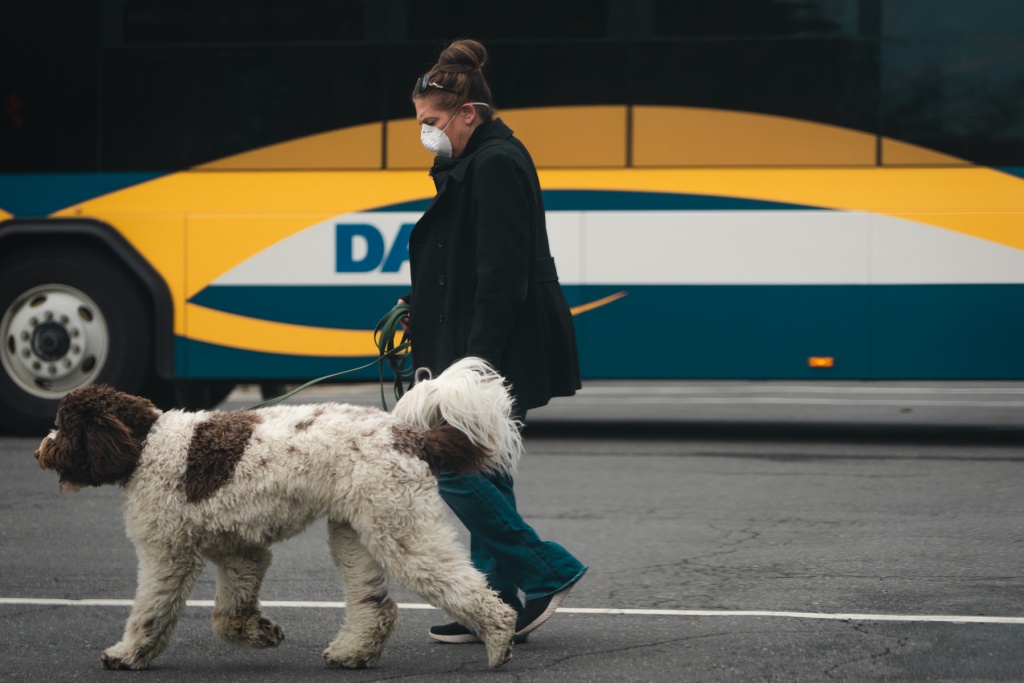 Lady at crosswalk walking her dog in front of my car. 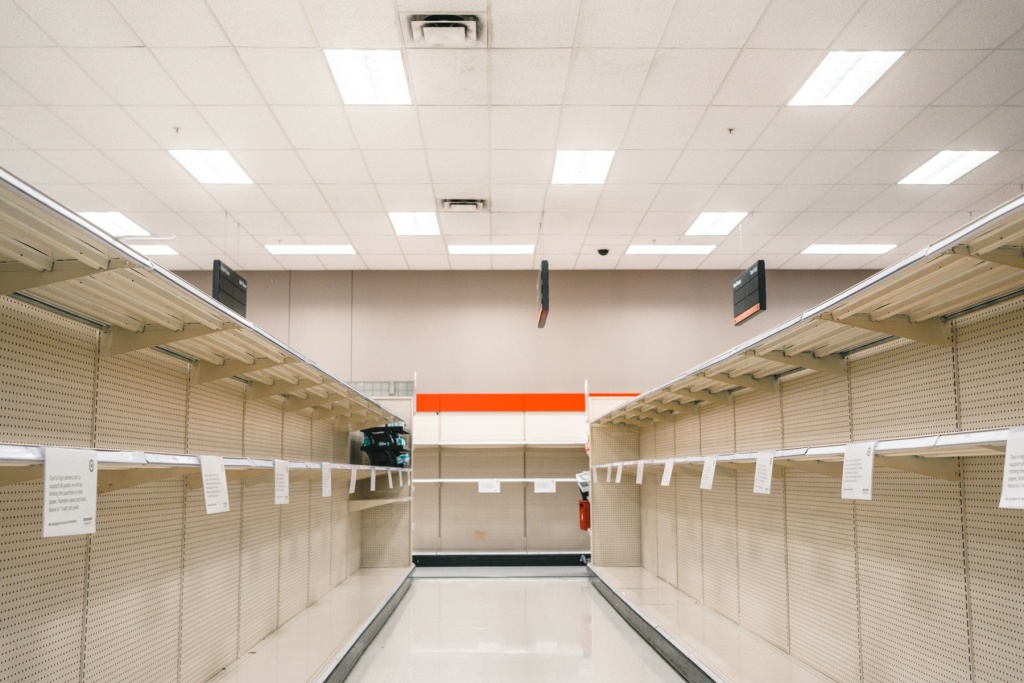 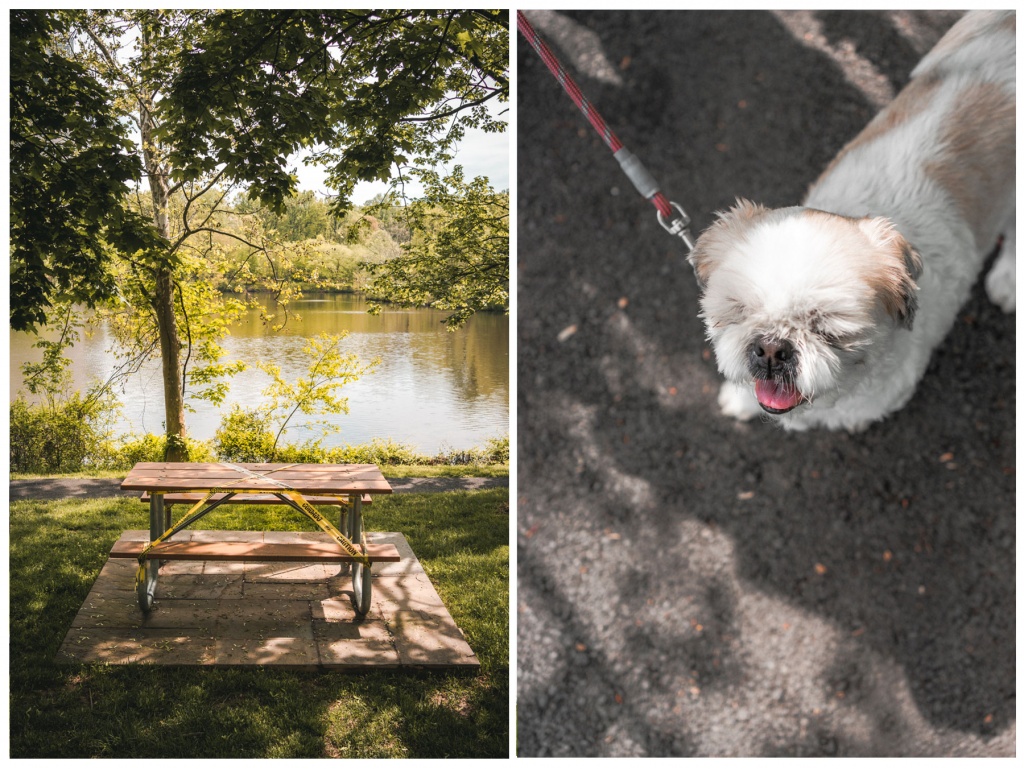 Finally, we broke out of our shell at the end of April. It was a nice, windy day, so Andrew and I took Frankie to the Washington Monument. Frankie was more interested in just sniffing the grass, so we didn’t end up walking very much. We mostly stayed within our own 10ft bubble and didn’t move. I brought my long lens so I could capture the people around us. 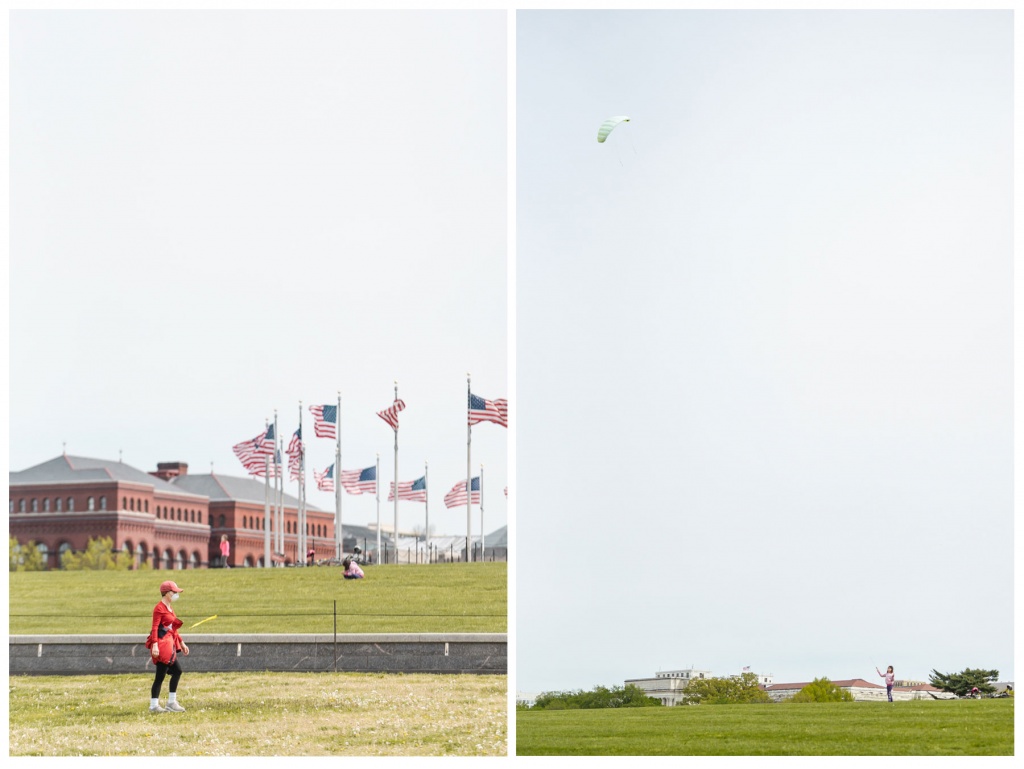 A few people enjoying the nice weather on the National Mall

On May 1st, Blue Angels announced the flight pattern that they would be flying around the Washington DC area for the next day. I wasn’t too sure if I would have been able to see it from my house, so Andrew and I ended up going to the National Mall. It was more crowded than I thought it would be, but definitely not the most crowded I’ve ever seen the area around the Washington Monument. My intention was to capture images that showed what it was like being there so I tried my best to try to include some of the other people who were watching. The Angels flew by so fast that I could barely capture what I had planned. 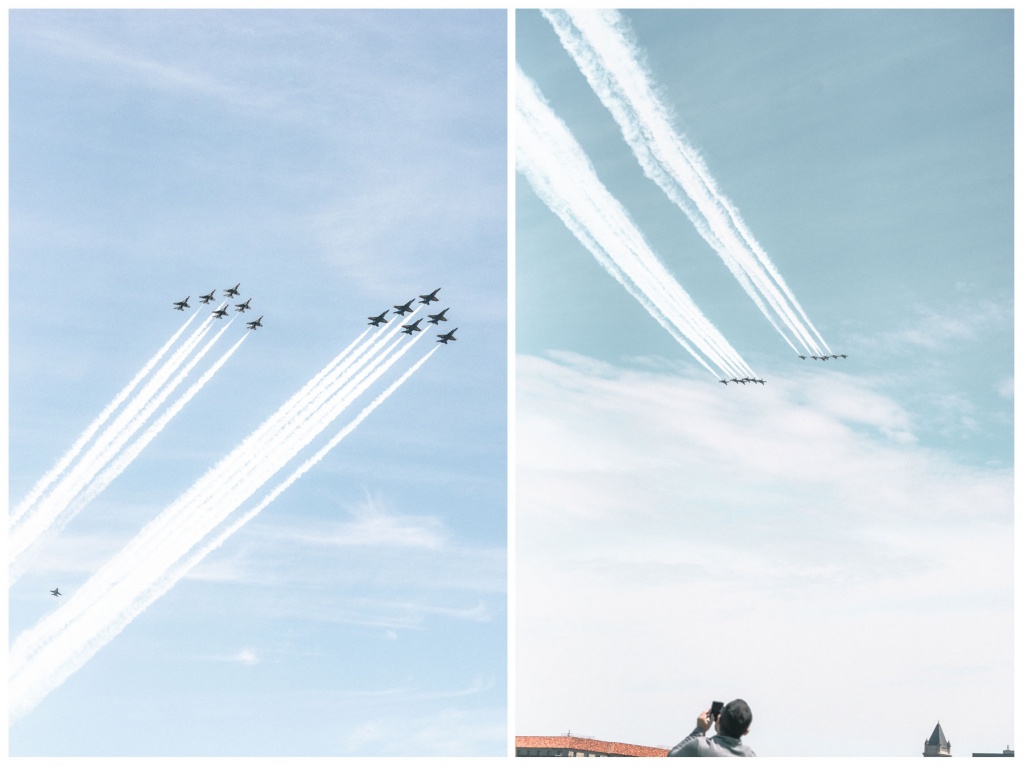 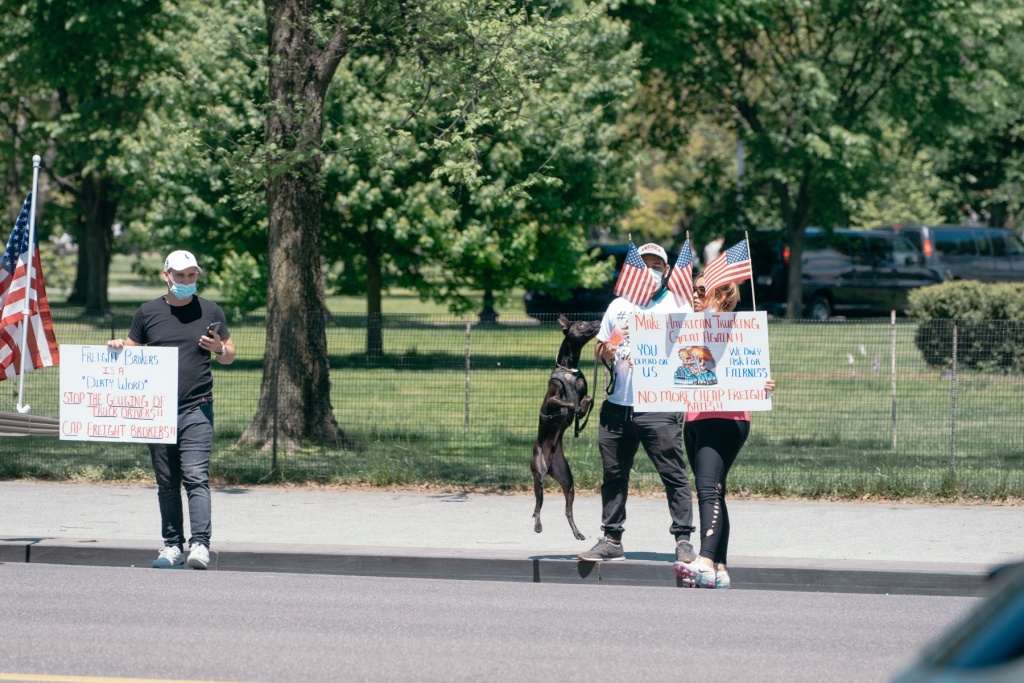 As soon as it was over, Andrew and I walked over to Constitution Ave to capture some of the trucking protests. This was my favorite capture because I got the dog jumping at exactly the right moment.

I did create an at-home project for myself. You may or may not have noticed that I don’t necessarily like being in front of the camera. I feel a lot more comfortable being behind it. But I saw so many quarantine self-portraits going on, that I had to join in and push myself out of my comfort zone.

In order to capture this, I put my camera on my tripod and I sat in a corner of our bedroom. The shutter was open for one second, which was long enough for me to do a little head shake. I took several images but this is the one that I liked most.

Washingtonian ended up using this image for an article they were working on with photographers and what it is like for them in quarantine. 30 photographers, 30 unique images. Click here to see it. 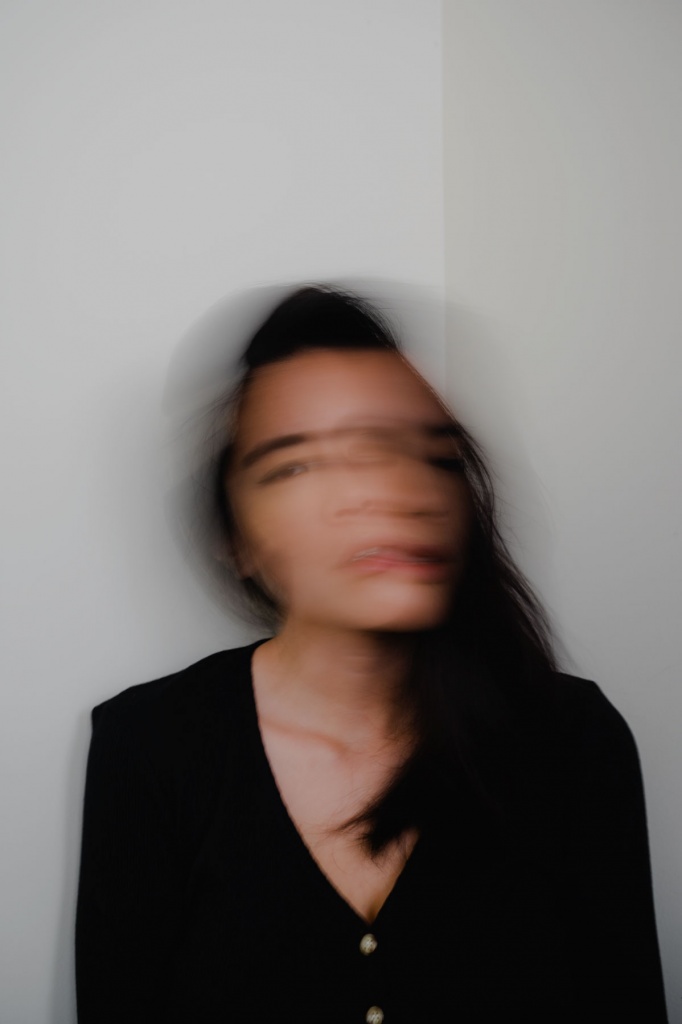 It may seem like I’ve taken quite a few images in the past two months, but it really doesn’t feel like it. It’s a fraction of what I usually would capture if times were normal. Especially considering some of these images were taken from my car and I didn’t even step foot outside. It’s a crazy world out there and who knows what the next two months will look like. I still plan on shooting and carrying my camera around whenever I can including simple things like neighborhood walks with Frankie.

If you made it all the way down to the end, I appreciate it so much. I hope you and your family are doing well and stay safe!