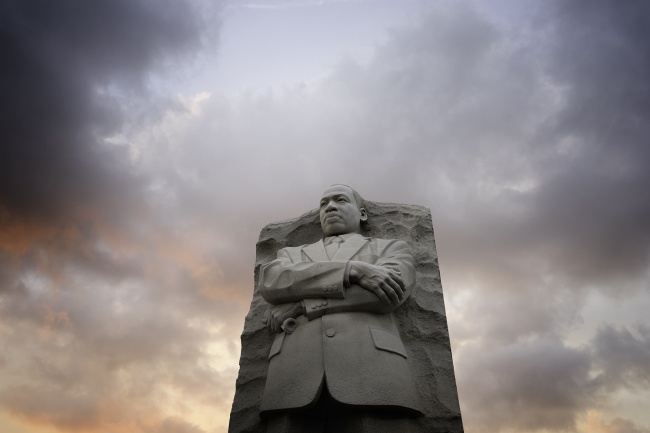 Whether it is sunrise or sunset, I have a group of places I usually default to depending on the time of day. The Martin Luther King Jr memorial is not my usual sunset spot. Actually, I don’t know if I’ve ever taken a photograph here at any other time of day besides sunrise. The only reason being is that I know it gets packed with tour buses as the day goes on and I try my best to avoid that.

So a few weeks ago I got commissioned to take some pictures of the memorial. I was waiting for a cloudy day because I knew the sky would take up most of the image. The previous days had been too cloudy though. So cloudy to the point where it almost looked like a cloudless sky because there were no details in the clouds at all. Just straight up grey. Until finally I was driving around, running some errands when the sky started to open up. I knew that sunset would probably be my only chance of getting the image I wanted, so I took my chances and headed straight to the Tidal Basin.

I was correct in the fact that there were bus loads of people all around the memorial. But I was also correct in the fact that the sky was going to be amazing that day! This was not the image I was commissioned for, but to be honest, I think this one is better! I love the way the way the colors in the sky are casted in the clouds. Maybe I should add the Martin Luther King Jr Memorial to my sunset list instead of sunrise. LOL, what do you think?