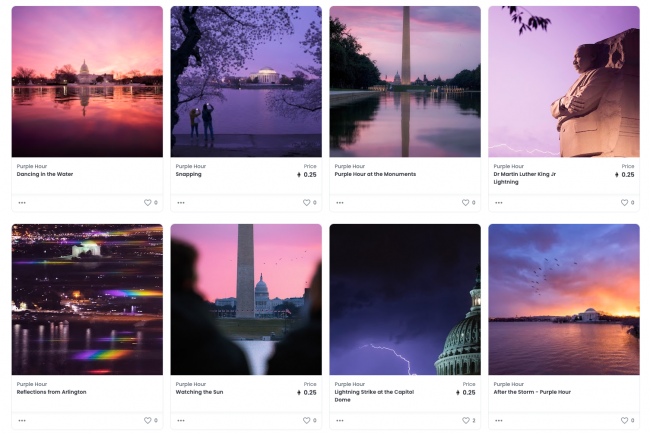 The whole metaverse is new and intimidating. But it’s something I have an interest in and wanted to learn more about so what better way than to dive in.

When it came time to sit down to really look at my body of work, there are a few that stood out as favorites. That is when I came up with Purple Hour. I realized purple was such a common theme in my work. Not intentionally but it was just the way that I saw a beautiful sunrise, flashes of lightning, or reflections in a piece of glass.  It reminds me that it is ok to just sit down and be present to what is going on around the world. That things don’t always have to be rushed.

I’m excited to mint these pieces of art that mean so much to me. Each one has a back story that brings back so many memories of patience and persistence. And looking at them as a whole makes me emotional, especially since becoming a new mom. It reminds me of a time when I had less worry and could concentrate on making something just for me.

So to introduce my genesis collection, I thought I’d write a little backstory to each of these images: 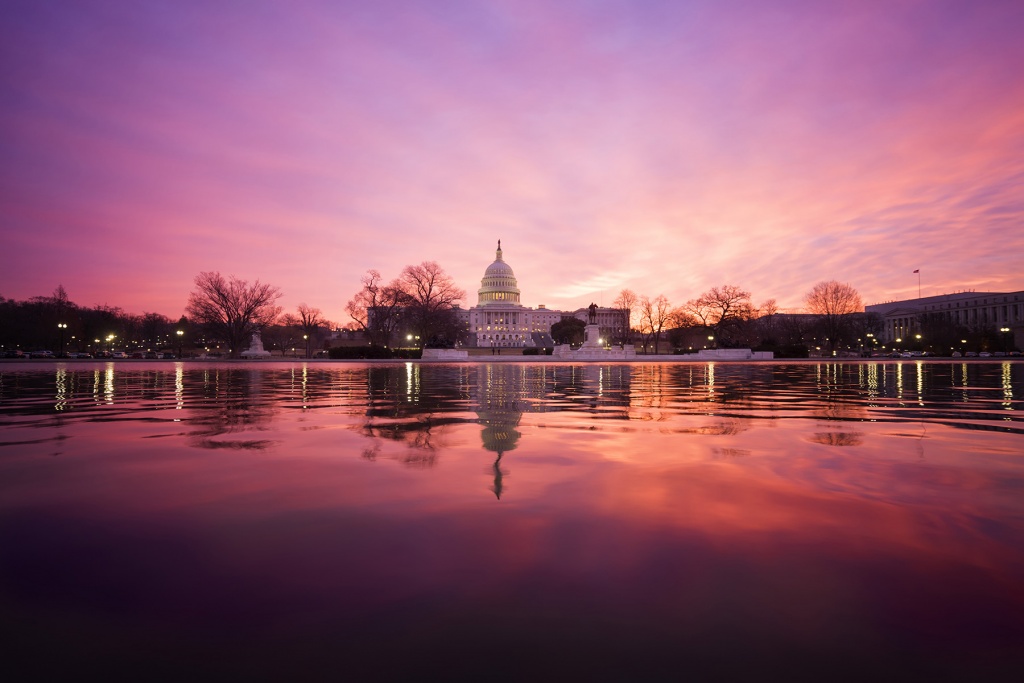 Dancing in the Water

Waking up before the sun is up is hard. It’s even harder when it’s below zero outside and your bed is extra comfy. But on a particularly cold valentines day, I remember watching this beautiful sunrise fill the sky. I was sitting along the US Capitol reflecting pool not even realizing how cold my feet were, I was just having the best time clicking my shutter. 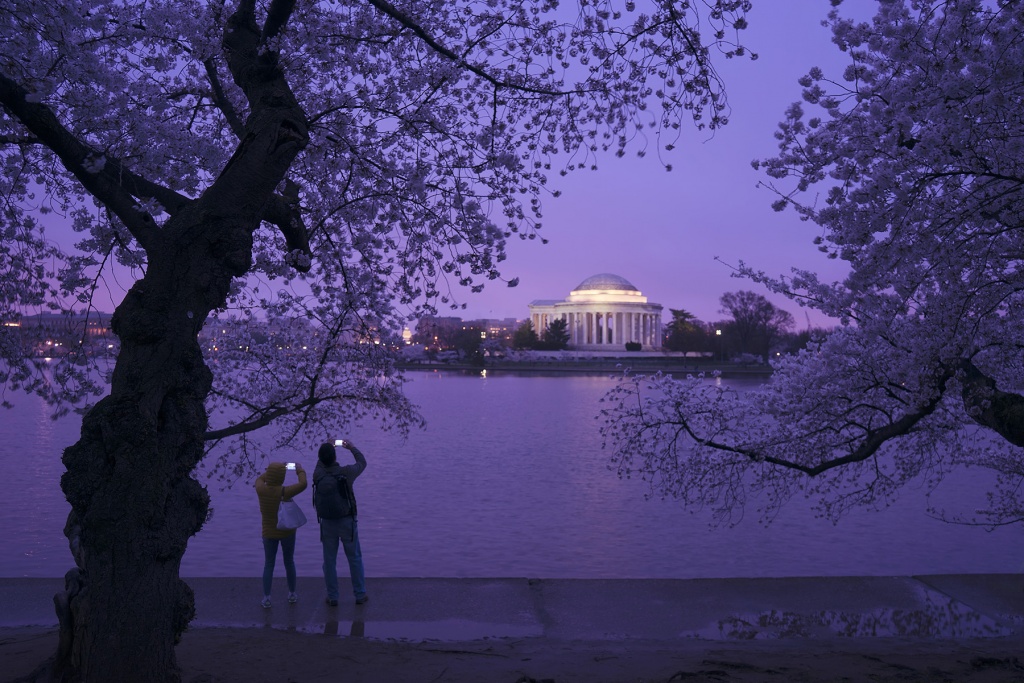 When I created this piece, it was the first time I had intentionally included people in my images. Sounds a little silly to say, but before this, I would wait for the whole scene to be clear in order to capture a scene. I think when you’re starting out in photography, you have this image inside your head of what it should look like. And when it doesn’t go that way, it’s hard to roll with the punches. At least that’s what it was like for me. But if you have ever been to the cherry blossoms at the Tidal Basin in Washington, DC, you know that is very hard to come by. I liked this image so much that it became the cover of the first book I ever published, Snap DC. 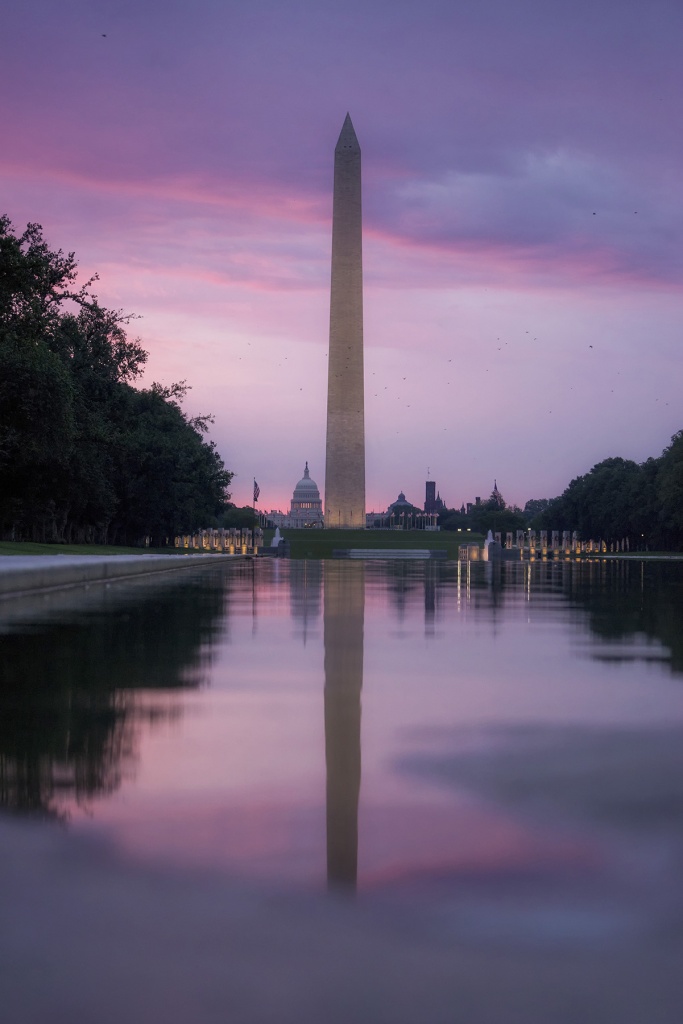 Purple Hour at the Monuments

One of the first times I had ever used my 70-200mm lens on my Sony camera system. It quickly became one of my favorite lenses after this particularly purple sunrise. I loved how I could capture this classic view in a different way. Plus these clouds were so dreamy. 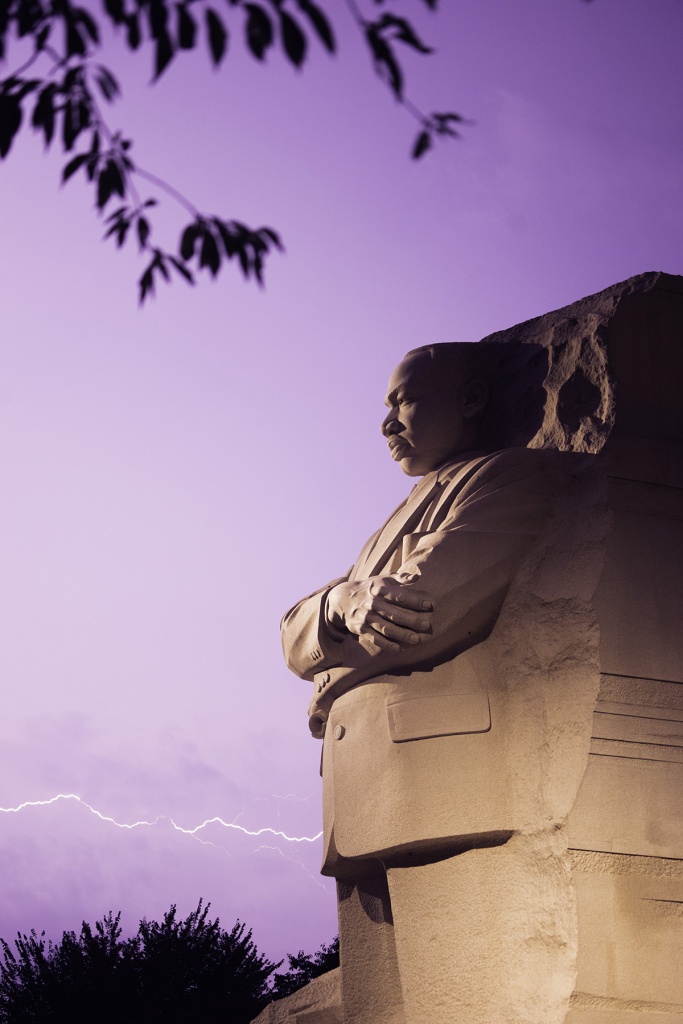 Even when you want to give up, there is always more to be seen. This was true on this dark and stormy evening on the National Mall. My friend, Zack and I had started off at the Lincoln Memorial. We did not capture anything worth mentioning but we kept on tracking the storm. We figured if we moved locations, it may be better. I was ill-prepared with no tripod. But persistence led me to create one of my favorite images I’ve ever captured at the Dr. Martin Luther King Jr memorial. 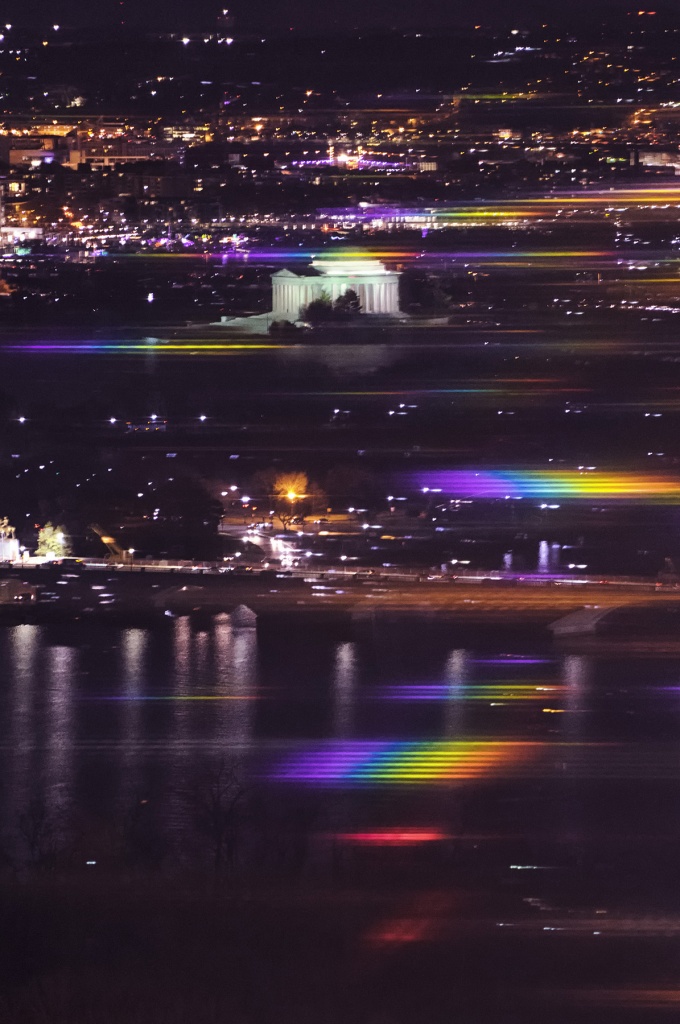 This image took me about 4 different visits to “The View of DC” in Arlington, VA.  I photographed it through two glass panes. The rainbows in the image were created by the Kennedy Center’s Honors lights that happen once a year. When the first few visits didn’t align with a proper capture, I was so determined to finally get it. 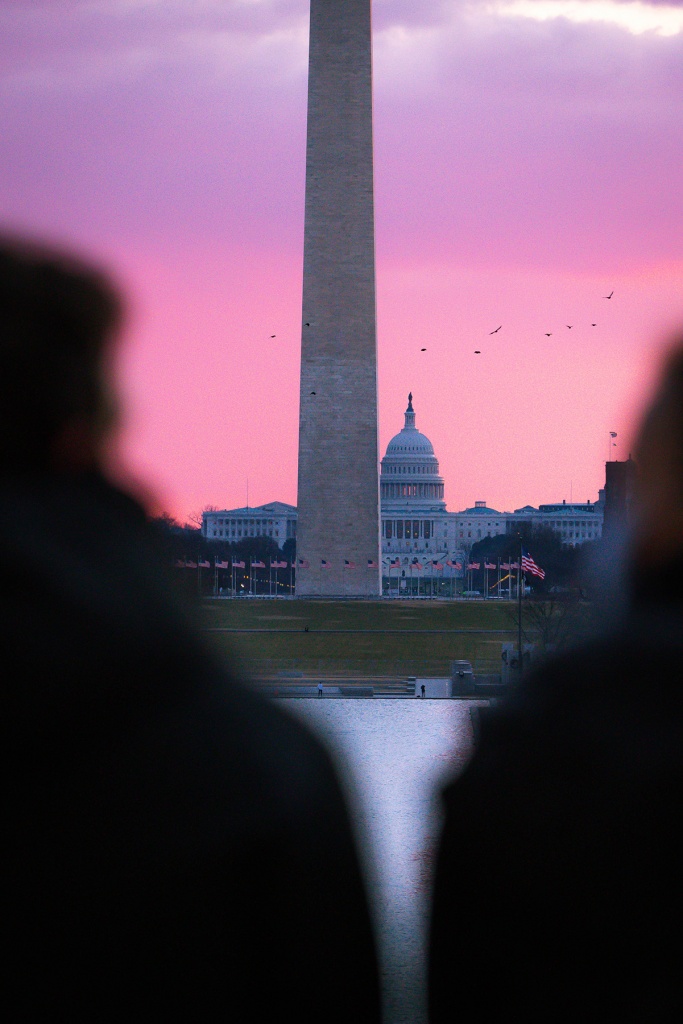 I have this idea in my mind that cold weather brings beautiful sunrises. This morning proved that point. I was there with a few photographers from the Washington DC area and as they stood watching the sunrise, somehow I ended up behind them. I originally thought their shoulders made for beautiful framing but now when I look at it, it stands for solidarity and friendship.

Lightning Strike at the Capitol Dome

Have you ever experienced FOMO? Fear of missing out. I was definitely experiencing that when I was getting alerts on my phone about lightning strikes in the area but I was at a gallery event. I remember carrying the phone in my hand and with each alert, I inched my way closer and closer to the door. I ended up leaving earlier than I had planned and made my way to the west side of the US Capitol. There I was, standing in a dress with my camera and tripod trying to capture the storm. It was probably one of the most thrilling experiences I’ve had capturing lightning strikes. 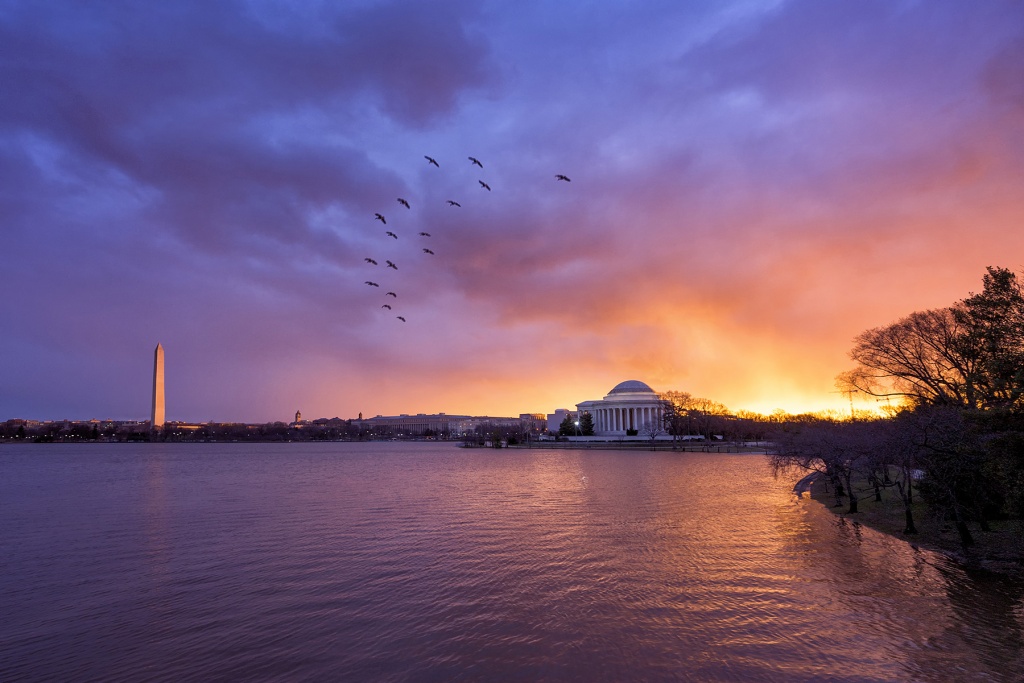 A huge tornado hit the Washington DC area and I was super excited to go out to photograph it. I even captured a huge lightning strike. I was so excited that I knew the sunrise the next day would be nice and I was right. This is a morning that will be hard to forget. It also happened to be the day that one of my best friends gave birth to her baby.

So if you are interested in owning an original piece of work, check out my opensea.

A non-fungible token (NFT) is a unique digital asset. A misconception is that you are purchasing art (asset) but you aren’t. You are purchasing a digital certificate of authenticity where you own the asset. The asset is considered to be anywhere from an image to a video or even a house. It can be anything that is original. The certificate on authenticity is then tracked on the underlying blockchain and provides buyers with proof of ownership.

And for people who say that NFTs are bad for the environment:

There are many strides to become more energy efficient. There are some block chains who are already use the proof of stake system which allows cryptomining to be much more safer for the planet. It can reduce carbon emissions and cutting energy consumption by 1/10000th of the usage. Etherium 2.0 has been working on the change and its rumored to be done by this year and is the the environmental aspect is the number one concern for many other blockchains coming out.