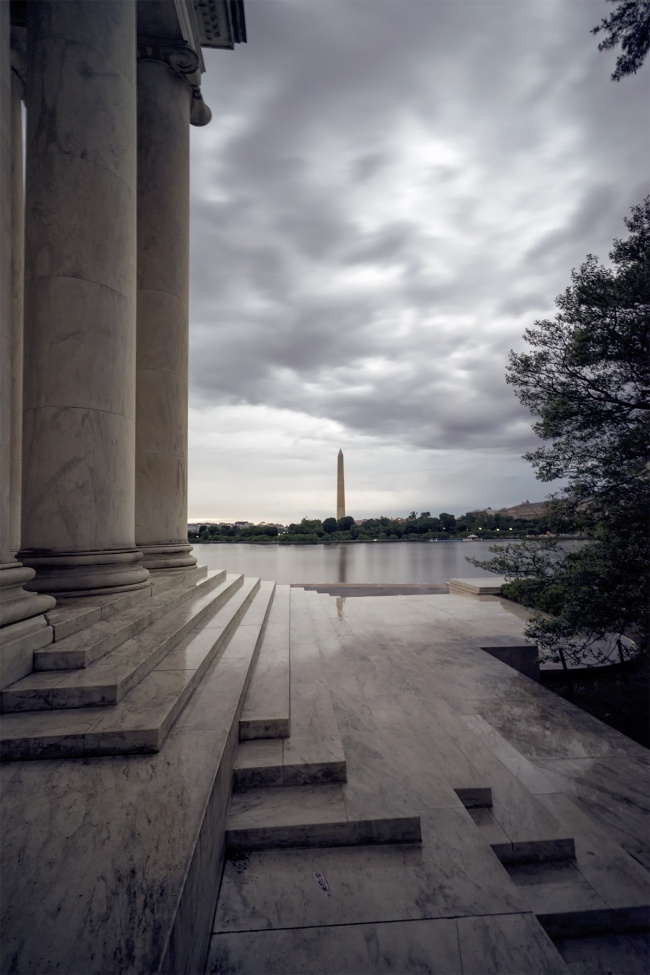 You wouldn’t be able to tell from this image, but there were tons of people out. All these school field trips, buses of tourists, and just people who wanted to see the sights at the Tidal Basin. So it was difficult for me to find my own little corner to shoot, but I did it! The secret is to figure out where all these people were coming in and exiting from. Its usually the same area, so I just walked on the opposite side of the memorial and BOOM. Clicky-click city.

This was during sunset but the weather had been calling for on and off showers all day. Music to my ears! So I went out, not really expecting much but the clouds were so dramatic that it was so easy and fun to shoot. I love how the steps of the Jefferson Memorial create a leading line to the Washington Monument. Also the tree on the right creates the perfect compliment for framing to the columns. But my absolute favorite part of the image is the distorted reflection of the Monument on the steps. So cool and interesting to look at. Who knew the marble was THAT reflective.

My camera settings on this image were f/5.6 at 10 seconds. I used my ND filter to slow down the exposure which is really showcased in the movement of the clouds. Good thing it didn’t rain for the rest of the night. I was having a ball with this sky. Also shooting at a long exposure can really blur out some of the people in the image. I think I’ll try for a slightly shorter exposure next time and experiment with the people. Kinda similar to this image I took in New York City at Grand Central Terminal a couple of weeks ago. Yea… that might be kind of interesting.