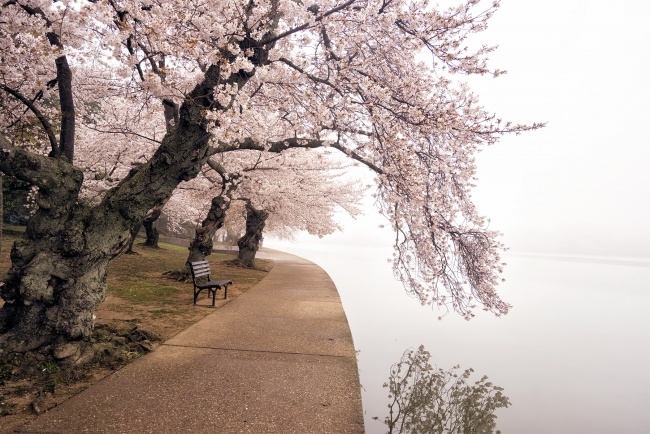 This was definitely one of my favorite days of 2017! Obviously Washington DC is famous for it’s cherry blossoms in the spring time but this past season was sooo unique. We had a crazy warm winter which lead to a weird snow that we got in March. It was so unexpected and out of nowhere. Everybody was so confused by it, including the cherry blossoms! They had already started to bloom and all the weathermen in the area were saying how this year’s cherry blossoms weren’t going to be doing too well.

They were right and they were wrong. A lot of the trees still peaked but some trees were complete duds. The flowers themselves weren’t as vibrant as they usually are. Which was totally fine by me because I think that also mislead a lot of people and they all decided to just skip the blooms this year. It was purrrfect.

So this was taken on a particularly foggy morning where you could barely see 10ft in front of you. It was soooo awesome and so much fun to photograph. I was probably out for 4 hours or something like that just photographing the flowers. The best part was that there was barely anyone there! Usually this place would be packed. I was in a photographer’s dreamland.

My favorite part of this image is seeing the slight reflection in the tidal basin water. It’s crazy to think that just right behind that branch is the Washington Monument which is totally covered by the fog. I usually use it as a point of reference because it’s so tall but you couldn’t even see it with your naked eye. It was bananas. And I love bananas. LOL