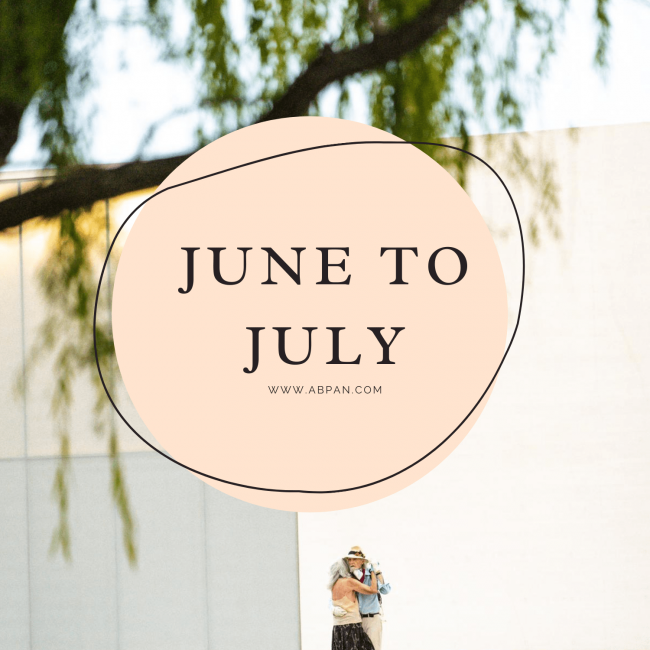 Sorry, long time no blog. I realize that my last two blog posts were about the Black Lives Matters protests in Washington DC. It is such a large subject to document and I really wanted to frame the posts in a way that wasn’t political but my experience at each of the protests I had gone to. But after a while, I was not sure how to transition away from that. I had gone to more protests and wanted to share the images, but I did not know how to present the images in a different way. One thing led to another and I sort of felt like I was in a creative rut. So I just didn’t write any blog posts and barely went out to create more pictures to share. 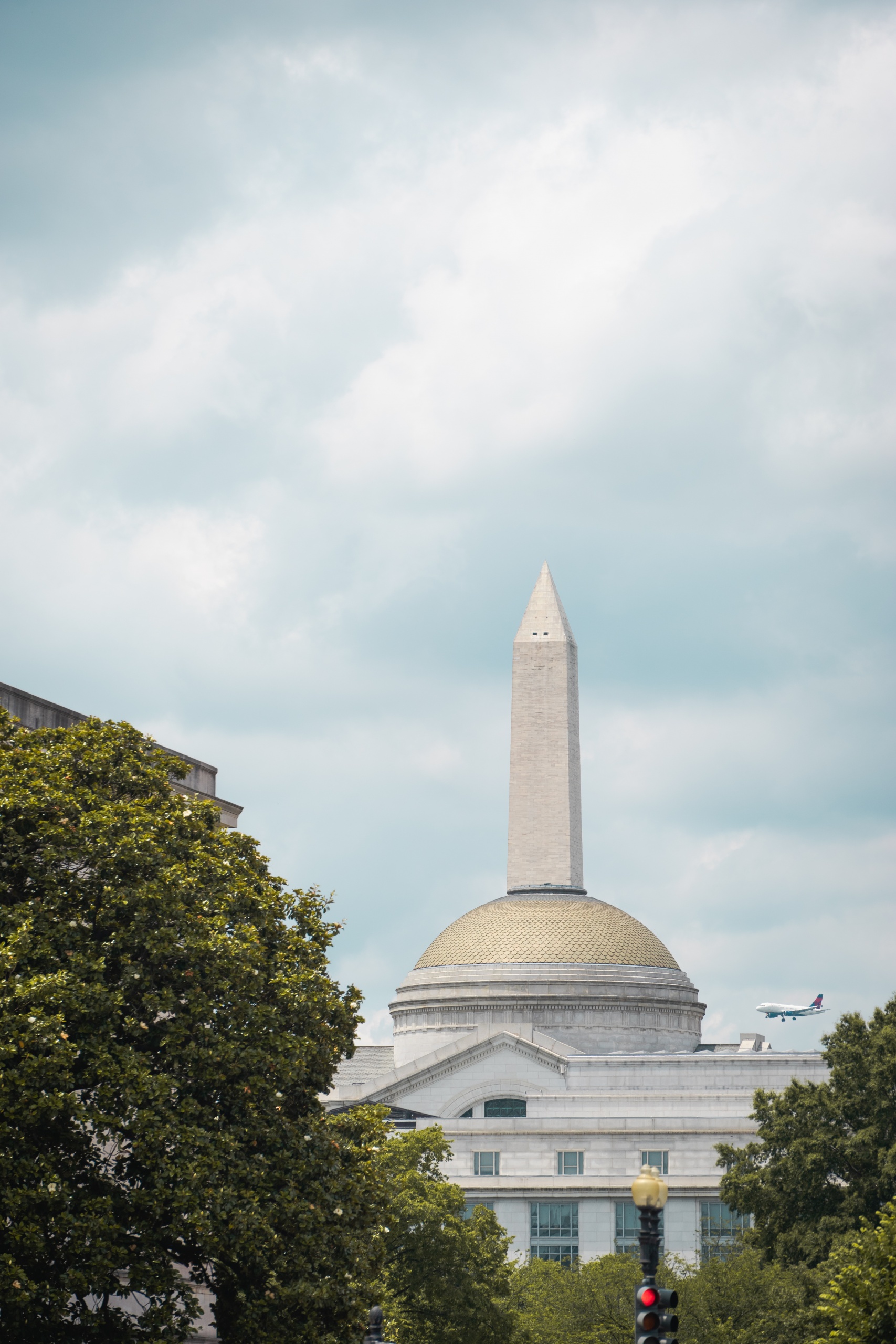 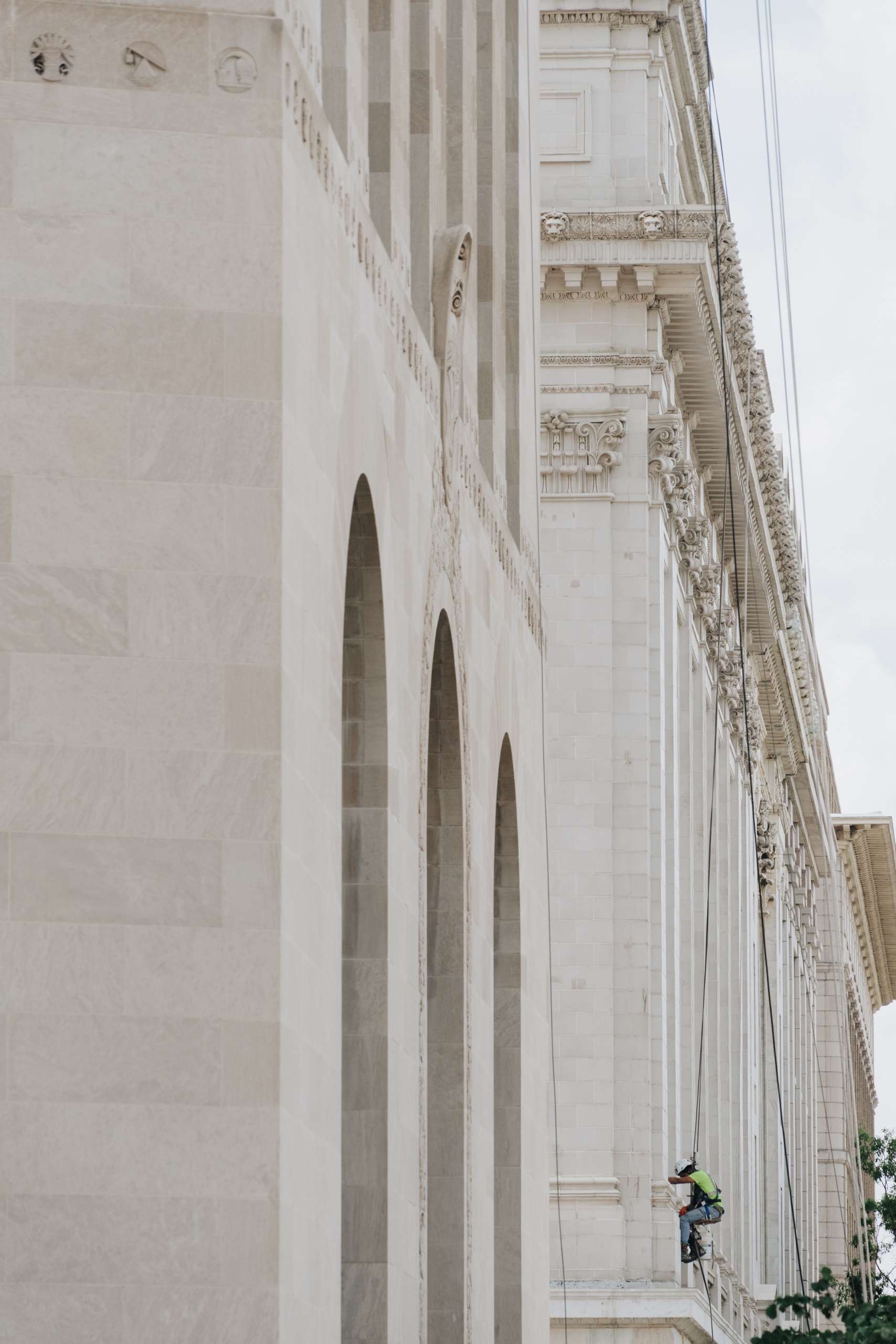 BUT I’M BACK BABY! After spending some time for myself and reflecting on the type of work I want to create, I found myself getting more excited about capturing images and sharing them.

But to automatically switch gears from the protests posts to my favorite road trips from Washington DC, seemed a bit of a weird transition. Don’t get me wrong, I have my favorite road trips blog post about 70% done already and that will probably be the next post after this one, but I figured this blog post can give a little update of what has happened since last time I blogged…

END_OF_DOCUMENT_TOKEN_TO_BE_REPLACED

5 Gorgeous Places to Photograph the Sunset in Washington DC 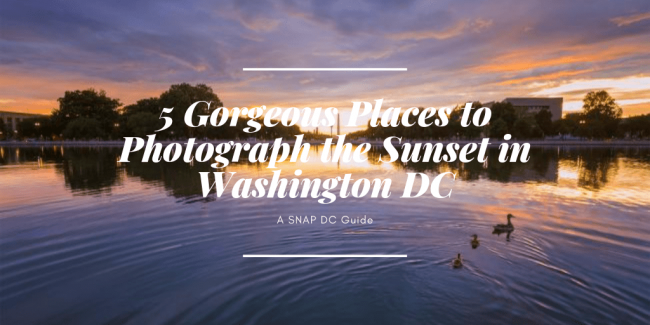 If you’re looking for the best spots to watch and photograph the sun setting in Washington DC, you’ve come to the right place.

The National Mall can get crowded, overwhelming and confusing. I’m here to help you navigate the park so you can get your best shots quickly and efficiently.

I’ve lived in the area my whole life and been photographing the National Mall for over 8 years. I’ve pretty much been to every one of these places at least 20 times. So here’s my complete list of the best to watch the sunset in Washington DC:

But First, Here’s What You Need to Get Ready for Your Sunset Shoot

Because of the number of people that visit the National Mall every day, sunset is a little more difficult to navigate than sunrise. There are far more people, we’re talking busloads of people, so be prepared. That means if this is your first time in Washington DC, I’d highly suggest public transportation either by metro, Lyft or even an electric scooter! All are very convenient ways to get you around the Nation’s Capital.

Also with the number of people, I’d even say try to get to your sunset location earlier than you think you should. Who knows what kind of hang-ups you could possibly run into. If it were a cold winter day, I say you could get by with going 30 minutes early. On a beautiful summer day, I’d go as far as saying an hour before sunset would not be a bad idea.

And my number one most asked question, are tripods allowed? For the most part, yes, but you may run into some complications. If you’re in a densely crowded area like World War II Memorial or Lincoln Memorial, you will probably be asked to take it down immediately by Park Police. They can be a walking hazard and just get in the way of people. But if you’re in a more spread out area like the Washington Monument grounds or even the Tidal Basin, there is a little more elbow room so you could get away with it.

The United States Capitol is unique because it’s technically not a part of the National Mall. The last time I spoke to Capitol police they said tripods are allowed. Since then, other photographer friends have told me that the Capitol police asked them to take down their tripods. So I’m still pretty if-y if they are actually allowed. I tend to just bring my tripod to the Capitol and if I’m asked to put it away, I do so politely.

Now on to The Top 5 Sunset Locations in Washington DC:

The Washington Monument is Always a Good Idea

The Washington Monument is so iconically Washington DC and the tallest structure in the city. So because of that, there is no best time to photograph it. It can be seen from so many different vantage points around the city that the possibilities are endless. However, if you catch it at the right time, it can glow orange. It’s absolutely amazing if you see it.

In order to capture the glow, I’d recommend getting to your sunset location early and face east towards the Monument. I would suggest standing either in front of the World War II memorial or along the grassy area in front of the west side of the monument and maybe 30-40 minutes ahead of sunset will work. I think the closer you are to the monument the better the imagery. But the key is to be patient. The way that the sun reflects off of clouds and on to the monument to glow doesn’t happen every day but if you see it, it will make your travel images very unique.

Other cool places to see the Washington Monument: POV Bar at the W Hotel, Rooftop Bar at the POD hotel in Chinatown (I have a thing for rooftop bars), Netherlands Carillion in Arlington VA, or along the Tidal Basin. 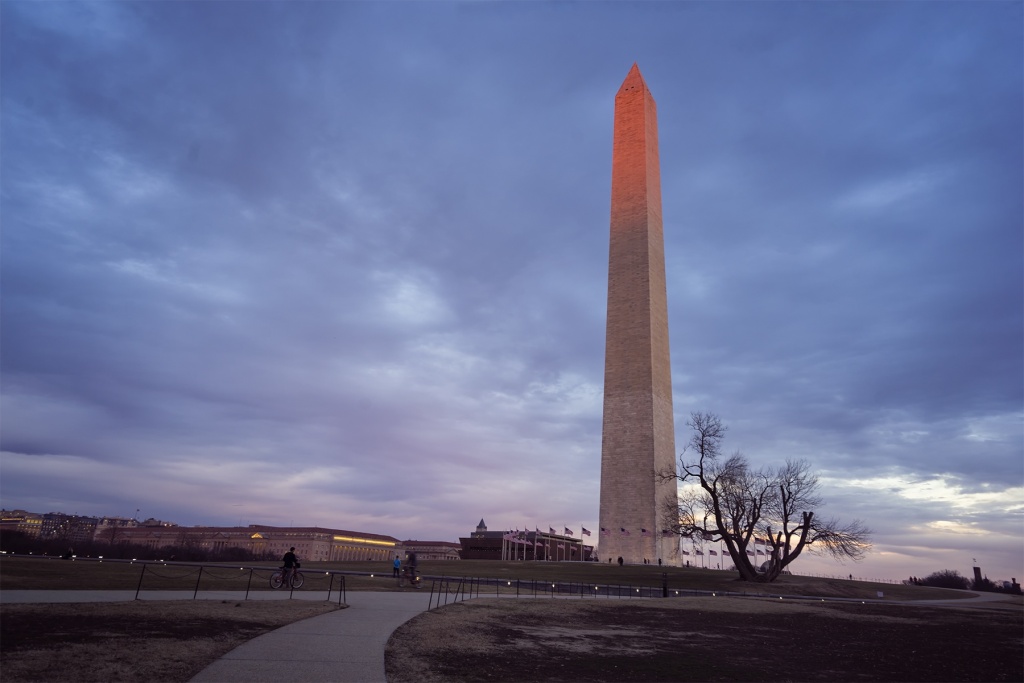 The Washington Monument glows orange on a winter sunset evening.

END_OF_DOCUMENT_TOKEN_TO_BE_REPLACED 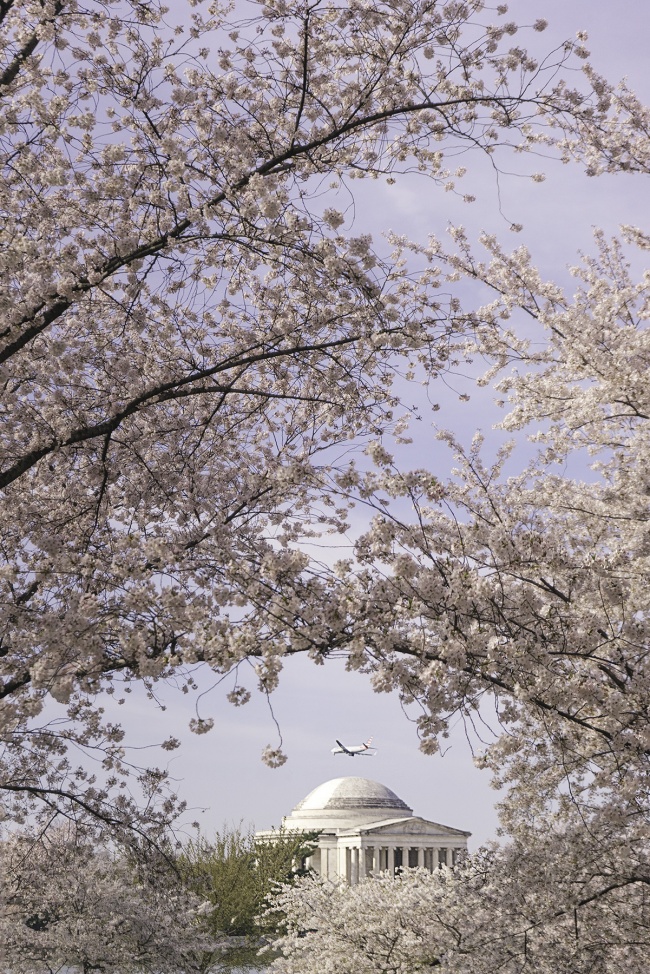 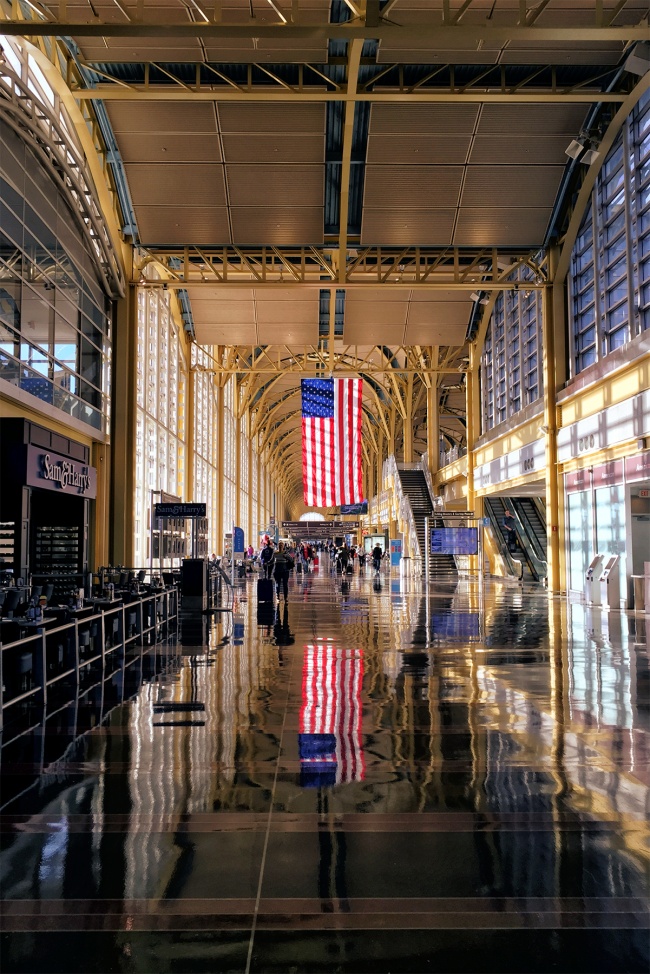 This is the first time I ever done this but this is an iPhone pic! Usually all my images on my blog are from my DSLR cameras but I just LOVED the way that this one turned out.

I took it at Reagan airport walking through the security line on our way to Maine. You know how it goes, you have a million and one things in your hands, you want to get everything together and in it’s place before you have to put your stuff in those big grey tubs and security is staring you down extra hard. It was an early morning flight so the sunlight was pouring through the windows. Luckily I was at the right place at the right time with my phone in my back pocket. I pulled that sucker out so fast, took this shot and just kept it moving. I had all my DSLR camera equipment in my backpack but it was just easier to take a quick shot with my phone. It wasn’t until I was sitting at the gate and I looked at the image and thought, “WOW, that’s patriotic!”

From now on, I’m going to try to fly out of DCA as much as I can. The airport itself is just so beautiful. There’s so much to take pictures and you can’t beat the view at take off.

So what do you think? Would you want to see more of my iPhone images or just keep it strictly DSLRs? To be honest, I don’t take much with my phone but in the rare occasion I do, I wouldn’t mind posting it on here.

Window Seat out of DCA 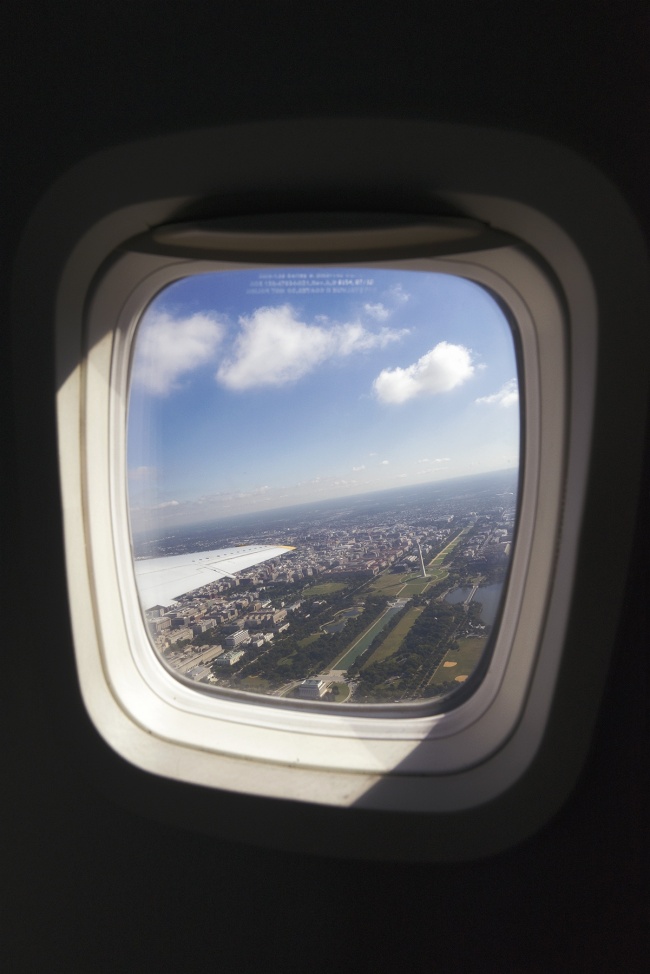 Somehow I’m lucky enough to live right in the middle of two awesome airports, Dulles International Airport and Ronald Reagan Washington National Airport.  But for some reason, I’m always flying out of Dulles. So when the rare opportunity comes up to fly out of Reagan, I take FULL ADVANTAGE! I do my research and try to figure out where I can sit on the plane to make sure I get the birds eye view of the National Mall. If you want to do the same, read on…

Lincoln Memorial in the Snow 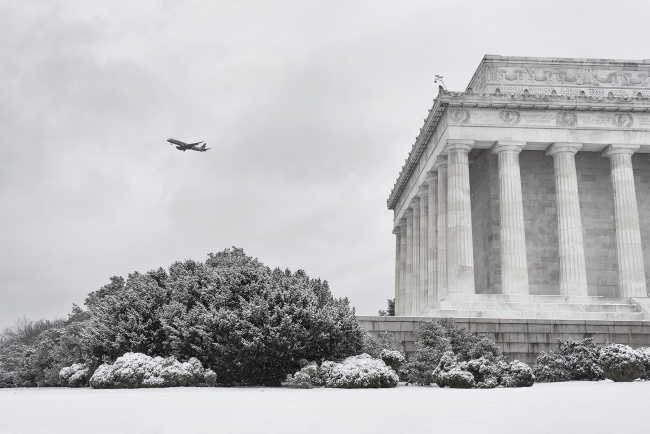 Studying the Lincoln Memorial architecture in the snow, I was just in time to catch the airplane flying over. The first time it flew over, I was lucky. Then I knew I could expect them to come every 10-ish minutes because the flights weren’t delayed due to snow. YAY!