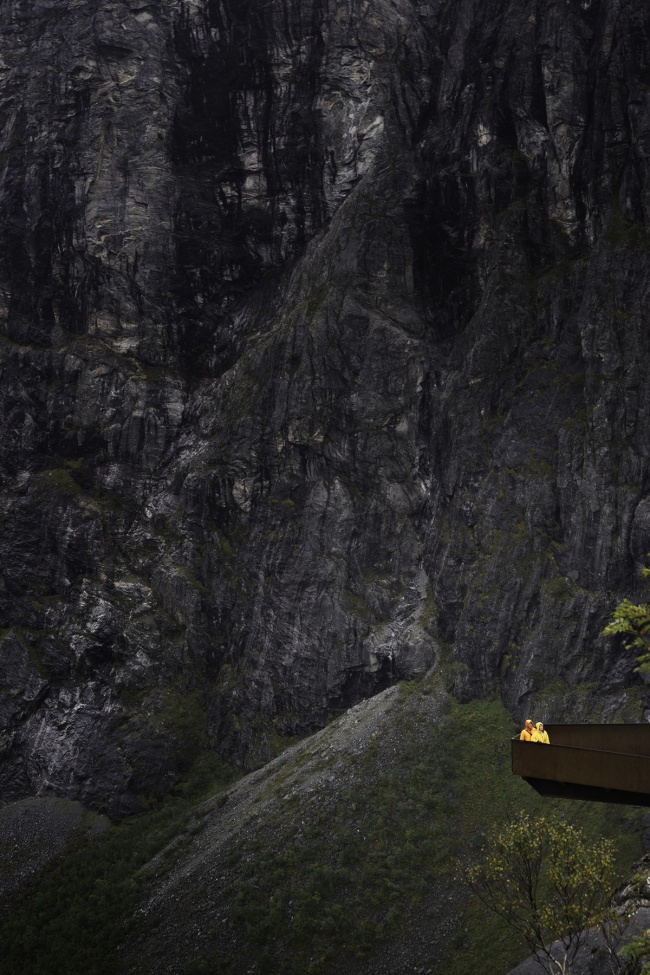 One really cool thing that Norway does is that they build these skywalks at really cool places. For example they had one in Flåm at Sognefjord, Dalsnibba in Geiranger, and a few other spots that we got to visit. It’s cool because sometimes they’re built so that there is just glass underneath you and when you look down it looks like you’re floating above a valley. If I had a fear of heights, this would  not work for me. Luckily I don’t so I thought it was the coolest thing ever.

This image was taken along the walkway to the Trollstigen skywalk. I was so excited to see the views from the skywalk but I got stopped in my tracks when I saw these orange/yellow wearing people. They’re jackets are so bright and colorful, I loved the way they stood out from the mountain behind them. Also the perspective here is kind of crazy.

PS this is the view.

After I took this picture I showed Andrew what it looked like on my camera. He thought it was really cool, especially since the jackets were so bright. I immediately told him that’s why I wanted him to wear bright colors so that when I photographed him, he would stand out more in the landscape. But to be honest, neither one of us are bright color wearing people. You can mostly find either one of us in a dark black tee shirt and be totally comfortable. I tend to take it a step further and wear all black… all the time. Blah, I dunno. I’m posting this in hopes that it will change my mind about colors. Or at least influence others to wear color so that if I see on you the street wearing something that stands out, I’ll want to take your pic 🙂