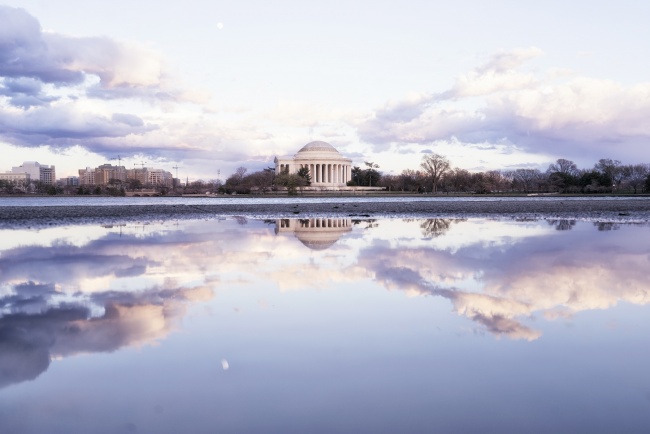 Last Friday was a crazy weather day. It’s been a long time since I’d seen anything like it. All through out the day mother nature switched from cloudy to sunny, rain to snow and even sunny with snow! It was bananas just sitting in front of the window and watching it all happen. Especially since the changes would happen every 10 minutes. So around 4pm I looked out again and saw some amazing clouds. I was really hoping for a great sunset. Usually when we have crazy weather days like this, the skies really light up.

I met up with my friend, Zack, to shoot the sunset from the Tidal Basin. Half sunset shooting, half scouting the cherry blossoms. Unfortunately the skies didn’t light up like I was expecting but I had a great time shooting from a low point of view. When I say low, I mean so low that I wasn’t even able to see what I was shooting. It was really a guessing game but one that worked in my favor. The water in the tidal basin was so choppy, there was no way that I would of been able get a reflection from it. Then we found this amazing puddle. It made me see the skies and the clouds in a totally different way.

Most of the time I’m out shooting by myself. So it’s great to meet up with people who have some of the same interest as I do. I had complimented Zack on a similar picture he took of a puddle and he was kind enough to show me how he did it. It made me think about all the other amazing puddles that I could of gotten a great shot out of but just walked away because I didn’t try it. Oh well. At least now I know.