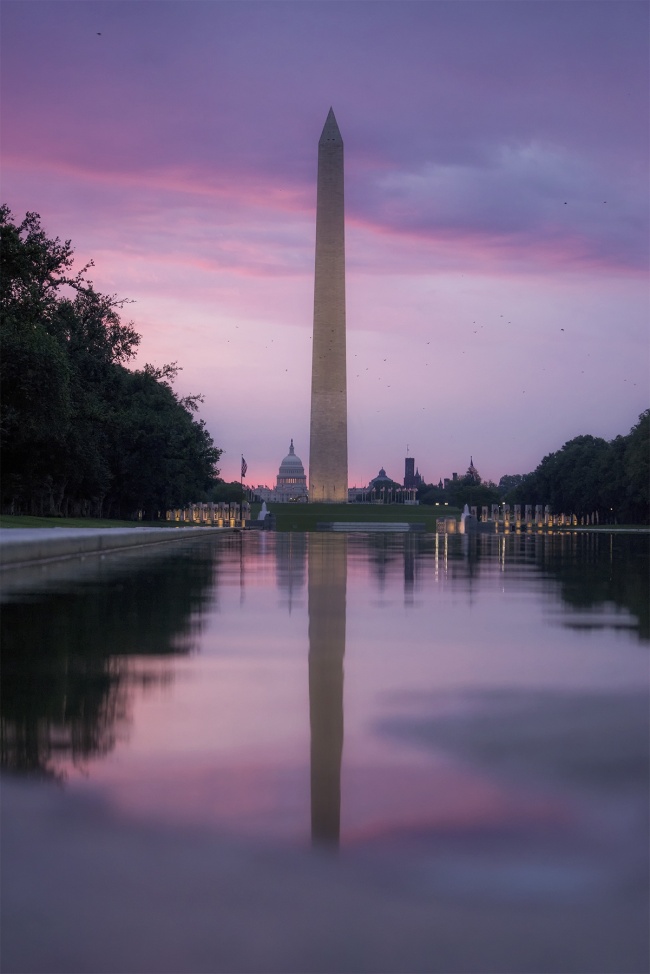 I captured this image earlier in the summer. I remember being out taking pictures just because I wanted to, not because I knew it was going to be a good sunrise. In fact, I think I remember it raining a little bit after I created this image and being surprised that there was even any color at all. The whole mood was very dark and grey. I was grateful to have gotten this 10 minutes of color because it turned out AMAZING!

My favorite part of the image is that little cloudy-ness you see on the bottom of the image. I don’t remember what that’s from? Is it a hard core cloud reflection? Or some moldy-ness from the reflecting pool? I dunno. Either way, I think it looks really cool and I love how it’s breaking up the reflection to make it look a little different.

Also the birds! They’re so teeny tiny in the image. Can you even see them? At first I thought it was a whole bunch of dust spots that I would have to get rid of, but when I zoomed in on them it was actually it’s just a whole bunch of birds 🙂 A photo trip that lasted only 20 minutes but totally worth the early morning wake up call 🙂

My camera settings for this image is F4 at 1/125th sec at ISO 1600 with my Sony A7II 70-200mm zoom lens. I did not have my tripod with me this morning so the ISO had to be bumped up to help compensate. I’ve also noticed that shooting with a long lens may cause some extra shake. So just to be sure I can capture a super sharp image, I’ll usually bump up my ISO a lot. Plus it was super cloudy, so you know… Gotta do what you gotta do to get the shot!